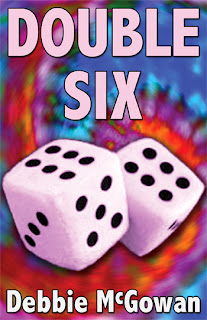 I've been a bit busy over the past few weeks. I re-designed my website, although I kind of cheated, as I used a template - it's now in HTML5, which is rather groovy. Check it out here: debbiemcgowan.co.uk

While you're there, also check out my 'read' page for excerpts and free ebooks. I've decided to give away book one of the Hiding Behind The Couch series (also called Hiding Behind The Couch) for free indefinitely. For the next few weeks you can also get book two (No Time Like The Present) for free, and I'll be giving away others for free from time to time.

I've also written the rather funky little novel called Double Six. It's a sci-fi fantasy, a bit 'timey-wimey' and all that, written for young adults, but adults will enjoy it equally, I think.

When Izzy Barlow passes her driving test, her mum buys her a Fiat 126 that's intent on returning to 1990.

But it's not the car; it's the rather uncool accessories it came with - a pair of fluffy dice that are a little bit different.