June 02, 2014
This week on my blog, we're trying something a little different. In honor of LGBT Pride month, I am among a great group of panelists who will be hosting a month long discussion about Pride, LGBT Youth, Allies, and more.

We will also be giveaway free copies of eBooks by our participating authors and a Amazon gift card. You can enter on the RC below. There are special entries for each week of June, so don't miss out on those.

Please join in the discussion in the comments. You can gain entries into the giveaway, but more importantly, you can be part of a important and fun discussion. Though only 2 panelists will be posting each week, we will all be joining the discussion. 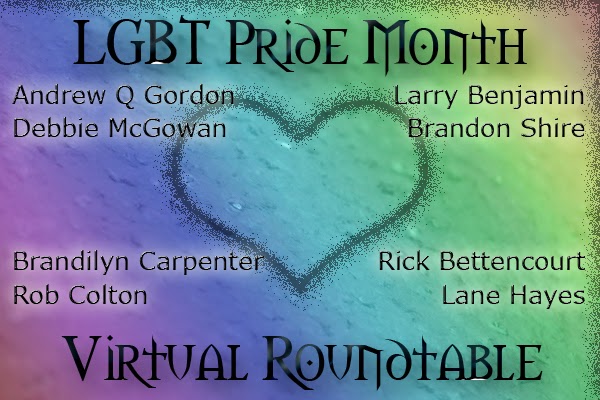 As the LGBT community gains more rights and acceptance, how has this affected LGBT youth?

It's a very emotional time for me to answer this question, and not necessarily for reasons directly associated with the topic of this roundtable discussion. Back in 2000, I started work in a high school - not my planned career, I must admit, but the job came up, and, well...we all know that story, and it's one for another time.

I was employed to teach in the sixth form, housed separately from the school's main building that I tended to enter and exit via the staff-room door, which meant for the first couple of months of working there, I didn't come into contact with the main body of students. This particular day, however, I decided (for reasons I do not recall) to step into the foyer in the middle of break (recess).

Bam! Wall of sound! The best analogy I can give you is the clacking of a multitude of seagulls - the school's located near Liverpool, which has a very guttural dialect and accent (much more so than any of The Beatles - have a listen to footballer Steven Gerrard, and you'll get the idea).

So, I'm standing there, utterly stunned by the noise and the sheer volume of teenagers. Bewildered, I look to my right, where there is a long corridor, with windows running all down one side. Children are scurrying everywhere, racing to get to the canteen for their break-time goodies, and teachers are yelling, "Stop running! Keep to the left!" And through the midst of this commotion strides a young man, flanked by two young women. He has big blonde hair, spiked and drawn forward. His thumbs are hooked in the pockets of his black, skinny jeans (sooooo not school uniform), and he's swaggering, right down the middle of the corridor, all not-give-a-f**k, king of the school, yet he was only in year nine (14-15 years old), so not yet a senior pupil.

It was just the most incredible thing, and he made so much difference in that school - I don't know if he's aware of that, but he, and other students who took that first brave step, paved the future for others. It's an amazing school for that reason, if nothing else. For there, sexuality is no more of an issue than any other aspect of growing up, and it's...wonderful.

To answer the question, therefore, rights and acceptance mean young people can concentrate on the million other things that are going on - learning, exams, going out with friends, choosing uni places, playing football, having romantic relationships - without worrying about a "difference" that doesn't matter, because it's just one of many things that make them a unique individual. It's not other. It's just...different. Growing up is tough enough already.

As for that swaggering young superstar: these days he runs a theatrical production company. He's an incredibly talented writer, actor and director. He has every right to be as out, loud and proud as he damn-well likes.

What does "gay pride" mean to you?

My answer to this question is really the flipside of my answer to the question above. First and foremost, I'm going to make a point of calling it "Pride" rather than "gay pride", because it's not about being gay. It's not even about being bi, or trans, or straight, or asexual, or any combination therein.

See, for every swaggering superstar in the world, there is at least one shrinking violet, who is simply too shy, too introvert and too self-conscious to be out and loud, however proud (or not) of themselves they might be. For those of us who fit this mould (yes, I am an introvert, contrary to what people might think), drawing attention to ourselves is not something we welcome, and being non-heterosexual, or not fitting the binary male/female gender categories does precisely that. We don't want that. We just want to get on with thinking, and creating, and philosophising, because that's what we do. But it's like having an enormous spot on the end of your nose. However great a conversationalist you are, you just know that the person you're talking to is thinking, "Look at that spot!" and even if they're not, you're thinking, "They're looking at my spot."

The point I'm making is that pride is an inner state of being, whereas Pride is a political endeavour.

Pride is the celebration of progress, affirmation, solidarity. It is about a safe space, raising awareness, and it is about drawing attention, so in some respects, the measure of its success will be its demise, inasmuch as it's characterised by garish carnivals, partying and entertainment. And who says you can't have fun whilst being political?

On the other hand, pride is self-affirmation, being comfortable in one's skin. It's about being true to oneself, and it's political on a deeply personal level.

To return to the question of what "gay pride" means to me, I get that it's politically important, I really do. But I worry about the separatism. I've heard and seen too many times the questioning by gay people of the motivations of straight people to join the fight for gay equality - why should they care? There's an implicit assumption that straight people only care if they have seen for themselves the damage that "phobia" has caused to a loved one, and I don't believe that's the case. So for me, it's not "gay pride". It's just pride: standing up for what is right, regardless of who or what we are.

Andrew Q Gordon is also hosting this week. You can read his most excellent roundtable blog post here: http://andrewqgordon.com/2014/06/02/gay-pride-month-virtual-roundtable

Larry Benjamin: Bronx-born wordsmith Larry Benjamin, is the author of the gay novels, Unbroken, and What Binds Us and the short story collection Damaged Angels.
Larry will be hosting the discussion starting 9 June 2014
Twitter: @WriterLarry
Website: http://www.larrybenjamin.com

Rick Bettencourt: Rick Bettencourt is the author of Not Sure Boys, Painting With Wine and Tim On Broadway. Rick hates to cook, and can often be seen eating out. He lives in the Tampa Bay area, with his husband and their dog, Bandit.
Rick will be hosting the discussion starting 23 June 2014
Twitter: @rbettenc
Website: http://rickbettencourt.wordpress.com

Brandilyn Carpenter: Brandilyn is the odd duck in this group. She owns an LGBTQ fiction focused review blog, Prism Book Alliance, and is the married mother of 3 young children. She is an advocate for equal rights and tirelessly promotes the gay fiction genre.
Brandilyn will be hosting the discussion starting 16 June 2014
Twitter: @BrandilynRC
Website: http://www.prismbookalliance.com

Rob Colton: Rob Colton is a software developer by day, and avid reader of romance novels at night. A romantic at heart, he loves stories that feature big, burly men who find true love and happy endings.
Rob will be hosting the discussion starting 16 June 2014
Twitter: @robcub32
Website: http://robcolton.com

Andrew Q Gordon:
Andrew Q. Gordon lives in the DC Metro area with his husband and 2 year old daughter. While he enjoys most types of fiction, his current works include MM Fantasy, Paranormal and Contemporary Fiction.
Andrew will be hosting the discussion starting 2 June 2014
Twitter: @AndrewQGordon
Website: http://andrewqgordon.com

Debbie McGowan: Debbie McGowan is based in Lancashire, England. She writes character-driven fiction, runs an independent publishing company, and lectures in social science. Sometimes she sleeps, too!
Debbie will be hosting the discussion starting 2 June 2014
Twitter: @writerdebmcg
Website: http://www.debbiemcgowan.co.uk