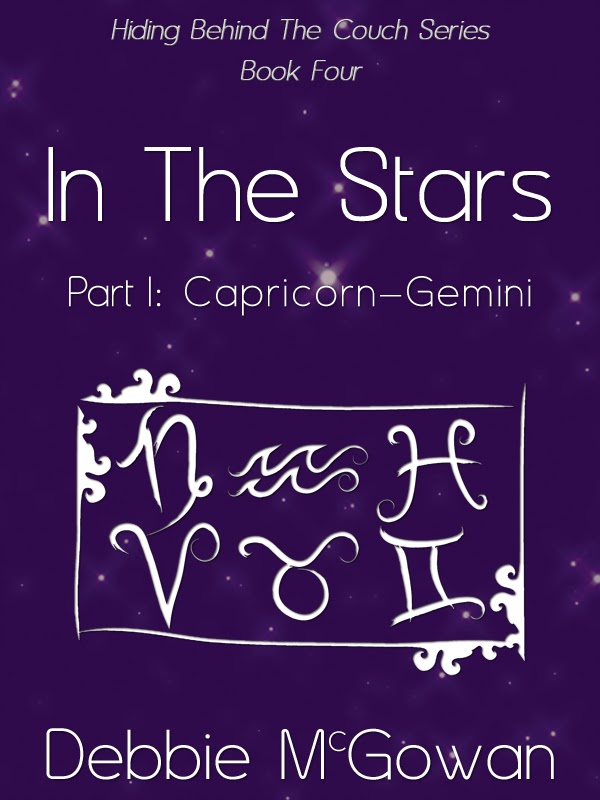 I'm releasing each episode of In The Stars separately, via Smashwords and Amazon, and it's turning out to be quite labour-intensive, but hopefully well worth the effort.

I've just made episode 3 (Pisces) available, as I will be on my way back from the London Author Fair on March 1st, which would be its 'official' launch date. This follows the release of episode 1 (Capricorn) on January 1st, and episode 2 (Aquarius) on February 1st.

The episodes are available from free-1.49 USD (reader sets price on Smashwords), and the full novels are 6.00 USD in ebook format - paperback also available.*

To set in context, In The Stars is part of my series, Hiding Behind The Couch. In its full form, In The Stars consists of two hefty, full-length novels (books 4 and 5 of the series), spanning the period of one year in the life of The Circle - the nine friends central to the series.

What I wanted to do with this particular instalment is give new readers an opportunity to get to know The Circle, so even though starting reading from this point will 'spoil' some of what has gone before, it is possible to pick up from book four, and perhaps go back to the earlier instalments at a later date. I'm encouraged by having picked up a small set of readers on Smashwords too, who are downloading each subsequent instalment of In The Stars - for free, but hey! They're reading it!

The theme: well, I'm not religious, and I have very little belief in the value of horoscopes, so it may seem strange I should structure the books around the signs of the zodiac. The happenings within those twelve months are the kinds of things that have us all questioning how much free will we have over the direction our life takes - relationships, health, illness, celebration - sometimes we seek solace in the belief in a higher form of some sort. With nine main characters, such beliefs (or lack thereof) can lead to conflict, and I wanted to explore how friends get through these conflicts, hopefully with friendships emerging intact.

So that's all I wanted to say, really. Episode 3 is available now. Us authors are always eager to hear from our readers (especially if you have good things to say), so if you do read, please take a little time to review. It really does matter a great deal to us on both a personal and marketing level.

And thanks for reading!