[I've never posted as part of a blog tour before, so I'm hoping this will in some way explain why my post is a day later than scheduled...]

The world we know is gone, destroyed by greed and ignorance. On a post-apocalyptic Earth, centuries into the future, few have survived the Great War. Some have taken refuge deep inside a mountain. One of them, Willem, is exiled to the surface...

Alone and struggling to survive, Willem embarks on an epic journey, making a discovery that could once again alter the future of humanity.

Willem of the Tafel is an epic tale of survival, second chances, hope and undying love.

Today on my blog I'm talking to Hans M Hirschi about his newest release, Willem of the Tafel. This is Hans' fifth novel, and if he hadn't thrown me a curve ball, I'd be telling you he writes contemporary gay fiction with strong romantic elements, along with frequent explorations of the meaning of family, and the effects of abuse and bereavement.

However, Willem of the Tafel is not contemporary; it's set in a post-apocalyptic future, although it does still have the romance, and it turns out I'm a sucker for romantic stories (who knew?).

Having dodged my initial question about who he would cast for the movie, I asked Hans a few questions about his characters.

Here's what he said:


Which of your characters would you like to spend a day with?

Naturally, I’d give an arm and a leg to meet both Hery and Willem, together or individually. To hear from Willem what it feels like to give up your personal life and happiness for the greater good of a society that had shunned him, to hear about his plans for Tafel and Cape Town, and get under his skin in terms of how he feels about the whole leadership thing. Can’t be easy… I don’t envy him.

From Hery I’d like to know what it’s like to tread in Adrianjaka’s footsteps, what growing up was like for him, given his hearing disability, and how he likes to roam the seven seas on board Stéphane’s boat. If I met both I’d like to just kick back and watch them interact. To be the fly on that wall… WOW!


Where would you take them?

I’m not sure I’d take them anywhere. Instead I’d be on my hands and feet and beg them to show me their society. But if they felt they would gain insights for their leadership roles, why not show them their respective cities in the 21st century for a quick glimpse? But I’m not sure that would be such a great idea. They’d have to beg me...


What would you show them?

If they were able to convince me to really take them, I’d show them the racism and the poverty that ravages South Africa, to help Willem understand just why the Shadows in Tafel bear such resentment against ghosts, but I’d also show them some of the more hopeful signs of collaboration in Cape Town, like the organization PRAESA that recently won the Astrid Lindgren Memorial Award. I’d probably also show them Robben Island, where Nelson Mandela spent much of his incarceration. I’d also like to take them to Madagascar and the capital of Antananarivo and the northern coastal town of Antsiranana, where Hery spent much of his youth. I’ve never been to the island myself, so it would be an interesting journey to make together...


Would you have any advice for them?

I don’t give advice unless specifically asked for, and from what I gather these two young men are doing just fine on their own and they have excellent advisors already. I don’t see what I could possibly add. Me on the other hand, I’d probably have lots to learn from them. Thing is, I’ve always looked up to all of my characters. They’re always “better” than their creator. So I am convinced that I’d be the one profiting from any encounter. :) 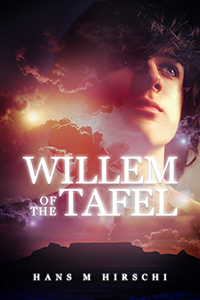 When Hans told me he was writing a post-apocalyptic novel and mentioned the term ‘sci-fi’ I have to admit to inwardly groaning. There are so many post-apocalyptic sagas out there in both print and film form, and I dislike them immensely. I think on the whole it’s a sign of our times: for those of us in western, relatively wealthy societies, and with our propensity to focus only on what is in our own back yard, our existence seems safer and more stable than ever before.

The reality is very different. War, famine, global warming, pollution, disease, poverty, genocide…these are not things of the past, but I envisage there is a certain thrill many readers attain from reading of a world gone wrong – crumbling cities, the sky a-flame, Bruce Willis/Will Smith/Keanu Reeves romping the streets clad in sweaty vest/sexy vest/Raybans…snore.

Willem of the Tafel is nothing like any of those post-apocalyptic adventures, although Willem is still a hero, but of the only kind that could bring about resolution to global conflict. Thoughtful, discerning, intelligent, young, Willem possesses a wealth of knowledge yet no desire to utilise it to attain power or oppress. A reluctant leader is the very best kind.

I have to – reluctantly – agree that the novel is science fiction, in the sense that it tells of a future that is scientifically plausible. Frighteningly so. However, it’s not heavy on the sci-fi: the technology referred to in the story is already in existence, and it is an aside to what the story is really about: Willem’s journey from childhood to adulthood, from Tafel society out into the world, from solitary wanderer to…well, you’ll have to read it and see.

Willem of the Tafel is available in ebook and paperback formats from all online book retailers, but you can support the author and publisher best by purchasing directly from them.