Taking Him On - Excerpt #2 and preordering... 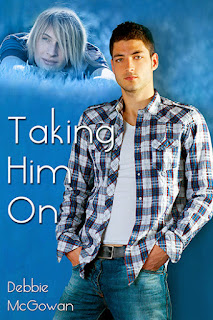 I posted an excerpt of Taking Him On, and people asked for more, haha. Who am I to refuse? Excerpt #2 is below.

You can read excerpt #1 here: www.debbiemcgowan.co.uk

(Some preordering up and running now - visit www.beatentrackpublishing.com/takinghimon).

"Bloody hell, that boy can talk," my dad said. "Have you asked him to marry you or something?"

I nearly choked on my fries.

"Don't be mean, love," Mum beseeched on my behalf. "They're only kids."

Dad picked up his burger and tore a huge chunk out of it, and then continued with his mouth full. "What are you gonna do when he goes to London, son? Go with him?"

I closed one eye so I couldn't see the food sloshing around. "I can't, Dad. I don't finish uni for another year."

"Go to a different one then."

"You can't just change university like you can school."

"I don't see why not." Dad swallowed his food and washed it down with a generous swig of lager. I waited, expecting him to continue, but apparently he'd said his piece, and he carried on eating like a caveman, pausing only to say 'all right' to Matty when he returned. Understandably, Matty's appetite had suffered over the past few days, but he seemed to be taking his inspiration from my dad and tucked in hungrily, finishing his burger but leaving his fries so he had space for some of the cheesecake he'd spotted on his way back to the beer garden. When the staff came to collect our plates, Mum ordered dessert for her and Matty, and Dad went off 'to the dunny', he said. If I'd liked gambling as much as he did, I'd have laid money on being able to find him at the fruit machine.

As soon as he was gone, Matty went and sat next to my mum, who automatically put her arm around him, and he cuddled close. Neither of them said a word, but they didn't need to. Their actions said it all. Strangely, I didn't feel the slightest bit put out by Matty needing my mum instead of me. Was that because I saw Adam as competition? God, I hoped not. We had enough in common already without adding another trait to the list.

Their desserts arrived, and Matty returned to his seat next to me, offering me the first spoonful of his cheesecake. It did look delicious, but I resisted and steered the spoon towards his mouth. He pinched his lips together just as I got there, and he ended up with cheesecake all around his mouth. I knew his game. Unfortunately, I'd cottoned on a bit too late.

"I hope you're gonna clean up," he said, inching closer.

Taking Him On is part of the Checking Him Out series, focusing this time not on Sol and Adam, but on Adam's younger brother Noah and his boyfriend Matty.

It's almost a year since Noah told Matty they needed to cool it, believing it was the sensible thing to do. After all, they were too intense, and they were both failing uni.

Now, with Matty just weeks away from taking up his place at a prestigious London dance academy, Noah is desperate to make the most of the little time they have left. It's only temporary separation, and they are forever. Or so he'd thought.

Available from 5th September, 2015 in ebook and paperback