My covers and the lengths I'll go to...

September 28, 2015
So there I was, in the midst of responding to Q&As for our* Where the Grass is Greener** blog tour when my co-author just chucks in an answer that leads to this blog post.

* 'our' being the delectable and awesomely talented Raine O'Tierney and my adequate self
**  Out today! 28th September, 2015 - Where the Grass is Greener


The short version of a very long (two months) journey...

I wanted a cover for my novel, When Skies Have Fallen, which was appropriate to the era in which the story is based. The story begins in 1944, when RAF corporal Arty Clarke meets USAAF technical sergeant Jim Johnson at a local dance hall. The novel follows their romance from 1944 through to 1967, against the social backdrop of war, post-war, persecution of homosexuals and decriminalisation of homosexuals in 1967 (in England).

Now, there are a lot of old black and white photos of men being affectionate with each other—some of whom are definitely men who love men—around the internet, and I spent a while tracing them back to source. I approached the guy who owns the collection, which is a collection of great social/historical significance. I asked if I could use one of the images. I even offered to pay what I'd previously paid for a licensed image from another charitable concern of historical significance (The Freud Museum). I can only assume my offer was insufficient, but When Skies Have Fallen is a free story, published as part of Love is an Open Road (mmromancegroup.com), so I couldn't afford to pay more.

I was searching for cover ideas for another book entirely, when I came across an image of two men, which was nothing at all like what I'd been looking for, but it had potential.

This montage shows the stages in the process of, as Raine said in the Q&A that led to this post, how I "turned two VERY modern boys into the WWII era dolls they are on the cover." 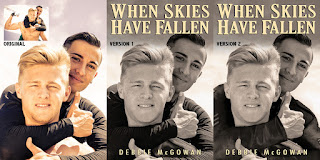