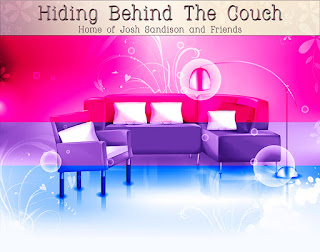 Today, I was accused of 'author preaching' about bisexuality in one of my books, and the best part of it was, on this occasion, I wasn't actually preaching! This, alas, is what comes from writing visible bisexual characters, and I'm going to keep doing it. Without apology.

That's not to say I don't get preachy from time to time. At the end of this post is an excerpt of full-on preachy-ness, all of it based on real reactions to bisexual people.

Readers of Hiding Behind The Couch will have met Kris Johansson. He's one of The Circle - the nine characters at the centre of the series - and he is the most visible bisexual character in my writing.

He's one of the two main characters in the stand-alone bi/gay romance, Crying in the Rain, which is FREE on All Romance eBooks until Sunday 25th September (to celebrate Bisexual Awareness Week). There are other bisexual characters in HBTC, but not in The Circle.

Here's a breakdown of the gender/sexuality of The Circle:

Aside from The Circle, in the broader 'cast' of the series, which has around 200 characters (at a guess - I haven't counted), there are around a dozen other characters who are LGBTQ.

For those people in the real world who have, at one point or another, accused me of 'being obsessed' with gay [sic] characters, please note the ratio of LGBTQ:straight characters in HBTC is lower than the estimate given for the general population. I rest my case...on that score.

Of those approximately 15 LGBTQ characters, less than a third are non-binary (i.e. they are not either/or in relation to their gender - male/female - and/or sexuality - straight/gay). So far, only FOUR are bisexual and visible.

Kris Johansson, then. He's not the most popular character by a long shot, and I'm almost certain it's nothing to do with him being bisexual, although there are readers who've said to me 'he's gay, he just needs to make up his mind' and they judge him as fickle on this basis. He's not fickle, but he IS outspoken. He's an actor, an extrovert, a performer. It's fitting for a character like him to be outspoken.

He's not without weaknesses, though, and there are times when even my most loyal readers have fallen out with Kris. Indeed, it's a standing joke in this house, whereby Nige comes up with new ways for me to kill Kris with startling frequency. I don't plan on taking Nige up on any of those ideas, in spite of him having given me one of my favourite lines in the series:

(for context, Mrs. Davenport is a devout Roman Catholic)


Mrs. Davenport's fridge was, and had always been, an immaculate contraption...

It might also be helpful for me to point out that Mrs. Davenport is the mother of Ellie (one of The Circle), whose younger sister, Charlie, is bisexual and features in the excerpt below.

On that note, I'll get right to it. Author preaching? Maybe. It's authentic to the character. It's authentic, full stop, and, interestingly, nobody has yet taken me to task for preaching about animal rights, anti-psychiatry or overthrowing the ruling class. These are just a few of the many 'preachy' topics I address in my stories.


"Do your parents know?" Kris asked.

Charlie shook her head. "I don't make a secret of it, but people assume and unless they get shitty I leave them to it."

"Aren't you going to have to at least tell your mum and dad if you come on the schools tour?"

"I suppose. How old were you when you told your mum and dad?"

"About being bi, sixteen. They'd always known I wasn't straight, and I didn't have to come out to them. I just told my dad one day that I was falling for Shaunna and he didn't even question it."

"Why can't it always be that easy?"

"You're not kidding! I can't believe I'm thirty-five this year, I'm a coach on the national squad, pretty much running a multimillion-pound business, yet I'm still having to justify my relationship 'choices'. I'd only had boyfriends until the last year of uni, when I started seeing a girl. It wasn't serious, we both knew that, but she got it into her head that once I escaped my family, I'd settle down with a woman somewhere, realise I'd been a lesbian all along. And that really, really pissed me off.

"It didn't last that long between us and it ended amicably, but she'd make comments about it, kind of under her breath and in front of other people, because after her, I ended up with one of my male housemates, and it was all going fine, but then he started up with the whole, 'I don't mind if you want to bring a girl home' thing."

Charlie paused and took a large swig of her lager, trying to stay calm, as it still made her angry. "That was the first time a guy ever said that to me, and then on the other side of it, my ex is saying, 'Time to leave the past behind, Chaz.' And so he dumped me, or I dumped him, I don't really know. It finished, whatever, and he told everyone he was doing me a favour. I was just confused. Confused? Yeah, mate! If you say so!"

"Yep," Kris nodded knowingly. "Been there."

"Bloody maddening, isn't it?" Charlie said. "When I came home after I graduated, I decided that's it. I'm going to be out, just with my old school friends and teammates. We'd known each other for years and I thought they wouldn't care, because I was still me, and there I am again. The girls on the team who were gay, which was quite a few of them, were all, 'I knew you were a dyke all along,' and my mates who were lads jumped straight on the 'my girlfriend's girlfriend' fantasy wagon. Not just my friends either―my brothers' mates, too, and we'd all played footy together forever. The only exception was Ellie's friends―you lot."

Everything Charlie had spoken of Kris been through himself, albeit with a different set of stereotypes, but the issue was the same: people struggled to accept bisexuality, which was precisely why he'd endured almost a year playing DI Mark Lundberg - the bisexual lead in Shadows - and spoken out against bi-erasure in interviews, gone in with the Shadows writer on her new series, and was happy to visit secondary schools as part of an LGBT anti-bullying campaign.

For as much as places like the UK were slowly coming around to the idea that some people are gay, the public, gay and straight alike, struggled to comprehend anything that didn't fit into a nice neat one thing or the other. It needed to start with educating young people, empowering them to be themselves, and to let others be, free from judgement and fear. It was the only way to bring about change in the longer term.