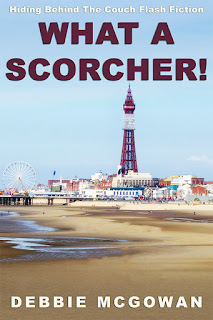 A pink straw sunhat dropped onto the patio table.

Iris glanced up from her magazine as Pauline passed between her and the sun—not that it mattered when she was under an umbrella. Pauline gingerly lowered herself onto the other recliner and lifted the hat, revealing a bottle of sun lotion—no, make that oil. “Bloomin’ hot, in’t it?” she said. She flipped the lid and upended the bottle, generously greasing her left arm, then her right.

“Aye. You told me last time we had a heat wave.” About ten years ago, if memory served.

Pauline squinted with one eye shut, checking her arms were well coated before she squeezed dollops onto both thighs. “Nowt wrong with making the most of it.”

“You could’ve just had a barbecue, love.”

“I don’t think they was invented then, but that weren’t the point. If you’d had cars round your way—”

“Eh, we did have cars, ta very much. We just weren’t as daft as you lot. Who in their right mind thinks ‘Bloody hell, it’s hot today. Think I’ll get the eggs out’?”

“You could’ve had one of them balls on a stick.”

Iris mimed throwing a ball sideways and batting it.

“Oh, you mean Swingball. Did you have one?”

“We did, love. Only the dog played with it, mind. Kept him occupied for hours, once he got hold of that ball.” Iris smiled to herself, remembering how she’d had to bribe him with cheese to let go or he’d just hang there all day. She missed Nero. He’d been a smashing dog, even if he was a vicious little sod.

“Do my back?” Pauline rolled onto her side. It would leave greasy fingerprints all over Iris’s magazine, but they were on their holidays, so she obliged, slapping the magazine down on the table as noisily as she could to let Pauline know she was doing it under duress. Not even a slight breeze ruffled the pages, which was a good thing, as it meant next door’s wind chimes were quiet too.

Iris eyed the white straplines over Pauline’s bright-pink shoulders and wrinkled her nose. “You realise you’re already burnt to buggery, don’t you?”

“It’ll take more than a couple of days of our piss-weak sun to burn me. I’ve got that sort of skin, you know. What’s it called…olive?”

Pauline chuckled and wriggled. “Get on with it, then.”

“All right, mardy.” Iris tipped some oil into her palm and spread it over Pauline’s back and shoulders. They were red-hot, but she was the same every summer. The sun only had to poke its head out from behind the clouds and she’d be stripping off as if her clothes were on fire. “You’re done.”

“Ta, love.” Pauline rolled onto her back and stretched for her hat but couldn’t quite reach. With a sigh, Iris passed it to her and exchanged the bottle of oil for her magazine. “We should go away somewhere proper,” Pauline said.

“Have you ever been?”

“I have, love. Four years on the trot with our Georgie and that fucker. He had the poor lad up and down the beach on them bloody donkeys like I don’t know what.”

“Are they still there, the donkeys?”

“No idea. It’s cruel, though, in’t it? Poor buggers, trudging through the sand all day in that heat.”

“Aye. Like that lickle donkey what took Mary to Bethlehem,” Pauline mused. Iris gave her an old-fashioned look. Pauline grinned back. “How about Conway?”

“Have you got a passport?”

Pauline frowned. “Give over.”

“Says she who’s covered herself in oil. Eh, mebbe we should fry you on a car bonnet. Mind, you’d slip off and bash your daft head on’t bumper.”

Pauline pulled her hat down over her face, ignoring Iris’s mockery, but it didn’t stay there for long. British summers were too short and unpredictable for Pauline to waste on sulking under her sunhat.

Iris lit a cig and sat back, appreciating the quiet while it lasted. No cars or lawnmowers, just the occasional coo of a wood pigeon in the trees at the bottom of the garden and the buzz and flutter of bees and butterflies passing through. Aside from the trail of a distant jumbo jet, the sky was an unbroken expanse of blue.

“We don’t need to trek all the way to the seaside for a proper holiday,” she said. “Besides, you know what’ll happen if we do. We’d spend God knows how long squashed up like sardines in a sweating-hot coach only to get there and have it bloody rain all week. No, love. I’m happy here. It’s me home from home.” Iris glanced over at Pauline and sighed. “Talking to meself, then. Right, I see.”

She got up to adjust the umbrella so it still covered her and then nearly jumped out of her skin when Pauline gave a loud snore. “Watch it or I’ll impale you on the bloody thing,” she muttered. Pauline didn’t even stir.

Iris returned to her chair and staring at the sky. She’d bob in and make a cuppa soon. She couldn’t be doing with the heat, and it was cooler in the house, which was where Blue and Monty were hiding. Not a mad dog or Englishman in sight, she started to doze herself.

Pauline snorted and sat up with a start. “Is that Mr. Whippy?”

“Trust you to hear that.” He had to be a mile away, but he was getting closer.