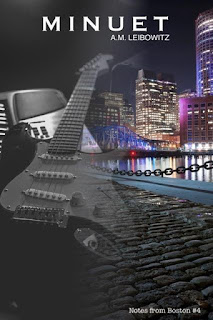 Full disclosure: I beta-read Minuet (along with books 2 and 3 - Nightsong and Drumbeat), which doesn't make any difference to what I will say - I'd love this series just as much had I read it in the usual way. But it has given me an insight beyond each novel, as I've kept in mind how the various arcs fit together and developed strong feelings towards certain characters. Those feelings don't always run in line with 'heroes' and 'villains', although...the one uber villain, well, let's say he gets his comeuppance quite satisfactorily in Minuet.

Central to this instalment are the characters Mack, Amelia and Jomari, and I must admit that I still don't feel I know Jomari as well as the other two, purely because I've known him for a shorter period of time. In some ways, he's more closed off than Mack, although there's an interesting on-page dynamic that hints at Jomari's greater openness in the company of some more than others.

Amelia...is just wonderful. True, in Minuet she has moments where she wobbles a bit (understandably) but in so doing reminds us that she is human after all, as she's usually so strong, wise and dependable. It was good to see that other aspect of her personality.

And then there's...Mack. Oh, Mack. I really didn't care much for him - for two whole novels! But the way he supported his friends in Drumbeat picked holes in my ambivalence, and by around the midpoint of Minuet I could honestly have read an entire novel focused on him.

Along the way, we drop in on the characters from the previous novels, which is one of my favourite things to read - much like cameos of characters from one book appearing in another, although in Notes from Boston they're all part of the same crowd, so they're always there in the background.

Best of all? The characters are queer - in all flavours - which is wonderful! Minuet, like the rest of the Notes from Boston series, showcases romance, love, friendship, family and everything else that goes into a substantial slice of life, through rainbow-tinted lenses. And music, of course.

Minuet possibly works as a stand-alone read, but I recommend reading the series in order to get the full benefit of watching the characters and their relationships evolve and deepen.

I've linked the books/series titles to the publisher's pages, but here are some more links for where you can buy Minuet: