I've been tagged by Hunter Frost to take part in the Meet the Character blog hop. 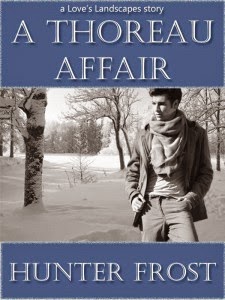 Her publications to date include the wonderful A Thoreau Affair  - a free short story about a former English professor and the student he can't forget - and the rather raunchy short, What Brown Can Do For You - where attraction blossoms between an IT geek and the UPS guy.

You can read more about Hunter Frost here: hunterfrost.net/about.

Hunter is one of 23 authors contributing to the Boughs of Evergreen holiday anthology, which is being published by Beaten Track Publishing on November 21st, and she came up with the rather wonderful idea of us taking a hop around the characters from our anthology stories.

Last week, Hunter introduced us to the delectable Mitch Sterling - the main character of An Angel in Eyeliner.

This week, I'm going to introduce you to Jinja, one of the characters in A Midnight Clear - my contribution to Boughs of Evergreen.

The setting of the story is a small northern town in England; it's early December, and bitterly cold. A young, homeless girl arrives in search of food, shelter and the real Santa Claus, and discovers that the spirit of Christmas can be found in the most unexpected of places.

Now, Jinja isn't very good at answering questions, so he's going to tell you all about himself in his own way.

Is that what I am now? When they took me from my mummy and brother and sisters, they made a noise at me over and over and I didn't like it. It was the same as the sounds the big dad cats made at home when they were fighting. Ssss...ssss...I don't remember. It was before. I think they wanted me to do something when they made the sound, and all I wanted was to go home. I nearly got there once. Well, no, I didn't. I got to see the other place that they call The Outside, but when I tried to go to The Outside, they lifted me up and put me down in the stones. I didn't like the stones. They were sharp and scratchy. That was before. Then I went to The Outside - I bet now I could stand on the scratchy stones and they wouldn't feel sharp.

So I know what The Outside does. It has cold and wet and dry. The water is flat and spread out and sometimes it is hard and I can't get it. Plus there are lots and lots of insides, but only one Outside. And I know that I am a cat, like the big dad cats, but not as big. I found out that some cats go to an inside, like the cat-he who was like the big orange dad at home. I don't like the big cat-he who chased me. I had to jump a long way up in the air to escape.

The ones that took me away are called peoples. That was before. The other peoples didn't say I was called a cat, or use the angry noises. They said Fleabag. This must mean the same as cat.

I definitely like Jinja more than Fleabag. And I like this people-she who says that I am Jinja. She feels very sad, just like me when they put me in the dark, small inside and took me to a new, big inside, so far away from my mummy and brother and sisters that I couldn't smell them or hear them anymore.

It's good I'm not there now, but something strange has happened. The outside has lost all smells and I don't feel right. The new ground is not as scratchy as the stones, and it is soft, but it is cold and then it is hot and I don't like it. Maybe I can tell this people-she that I want to go to an inside with her. She makes nice sounds and lets me go to her small inside that is warm, and sometimes I put my nose on her face and she is not as sad. I wonder if they put her on the scratchy stones and that is why she went to The Outside? Peoples don't much like The Outside, as far as I can tell.

I think she would like to go to an inside too, because it is very cold and I am scared and feel strange, and she is scared. I know, even though she doesn't make scared noises, and I'm sure we could find The Inside if we try. Cats are meant to find things on their own, but we could look together. In the hot wind it felt like she wanted us to help each other, and I didn't like it at all, but she stopped the cold that was hurting me. I am not frightened when she lifts me up. I feel safe.

So I will be her Jinja and we will go to The Inside together. I will even let her put me on the scratchy stones and listen until I understand what to do. Do I eat them? I could eat them now, if I wasn't so sleepy and if there were smells to find them. They must be under this new white ground that fell from the sky when it was dark. I hope we can go to The Inside soon. I will go after her and tell her.

Some Other Authors in this Blog Hop

Laura Susan Johnson has been writing since age eleven, cutting her teeth on tales of the family pets. Aside from writing, Laura Susan enjoys quilting, playing around with colorful makeup, clothing and hair colors, web design, and vegan cooking. She resides in California, Idaho, Arkansas, and the northern coast of Oregon.

Laura is the author of the novels, Crush, Bright, and other stories that form the series, The House on Glass Beach.

Ofelia Gränd is Swedish through and through. She is constantly thinking of stories she would love to write. Anything and everything is a source of inspiration that has her lost in thought, staring off into space, in no time at all. Sometimes she turns a street corner, and sees a different world. She is often walking around mumbling to herself and her intended characters. Every so often she is painting mental pictures of their appearances, or wishing that she was better at Photoshop, because she knows exactly what the cover of the story in her mind should look like. Real life, however, interferes all too often, and the stories mostly remains unwritten.

In real life, Ofelia is living with her husband and their three children in a small town on the southwestern Swedish coast. When she isn't a stay-at-home mom, she is teaching Swedish and Swedish as a second language to teenagers and adults. She has been thinking about teaching English, but since she isn't fluent in the language, she is sticking to the one she knows well. Therefore, she, more than anyone, is a bit perplexed about why she thought it would be a good idea to try to write in English. But, she'll probably come to her senses - sometime.

Many moons ago, with the encouragement of a writer friend, K.C. Faelan wrote her first fanfic story. After a few years, her muse went into hiding, and then suddenly re-emerged, urging KC to participate and write a story for one of the prompts in the Goodreads M/M Romance Group's 2014 Love's Landscapes DRitC event. The story she wrote was "If At First You Don't Succeed," a romantic comedy about established couple, Evan and Julien and their unsuccessful attempts at kinky sex.

KC prefers to write contemporary male romance, but enjoys reading about them in almost every setting from paranormal, to sci-fi to historical backdrops. She loves men, from the Alphas to the omegas, and all the pretty boys in between. Intelligence and humor whet her appetite. Toss in a course of UST, a dash of angst, season with fluffiness, and she dives right in. Oh, and don't forget the extra-large side-helping of sex. For dessert, it's HEA all the way. She loves dark chocolate truffles and candies, and food often plays a part in her stories, and in the ones she enjoys reading.

KC lives in Northern California with her husband and two rescue birds. Their female bird hates women and wishes KC would go play in the middle of traffic or take a long walk off a short pier.

Posted by Debbie McGowan at 12:24 pm No comments: Links to this post