The Adrien English series, by Josh Lanyon - a review 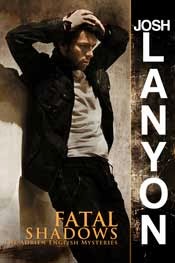 I'm in denial, because the reality is that I am completely in love with Josh Lanyon's writing. Yes, it's a little formulaic, and there are some parallels to be drawn in terms of characterisation between series, but it's well written and an easy read. What also helps is he's a bringer of Happily Ever Afters, and I like these. A lot.

Last night I finished the fifth novel in the Adrien English Mysteries series - there is a book six that's a kind of 'write it yourself' thing - I may take a peek, but I prefer to have the story already told. So, effectively, book five is the end of the story.

I started book one on February 9th, and today is March 7th. Talk about getting sucked in!

The series is set in Pasadena, where Adrien English owns Cloak and Dagger book store. He's an amateur sleuth, and a writer too, of a bizarre murder mystery series about a gay Shakespearean actor and amateur sleuth! The story begins with the murder of Adrien's long-time friend and employee, Rob, soon after which Lanyon introduces the reader to the other star of the series, Jake Riordan, a homicide detective.

Each book in the series deals with a new mystery, although the relationships, between Adrien and Jake, between Adrien and his mother, and various others, develop throughout the series. There are road trips to old ranches, to visit retired cops, fateful voyages aboard boats, celebs, politicians, satanism, secret lives, stray cats - it's got the lot, but for me it's the characterisation and relationships that make a story.

The dynamic between Adrien and Jake is electric from the start, and where other reviewers have said they hated Jake early on, I didn't ever experience this. I did despise Adrien's mother for most of the series (loved the line in A Dangerous Thing - "She has her moments, does me mum." I thought, "Ah, she's from round our way."), but she suitably redeemed herself toward the end, and that's a sign of great penmanship, right there. We should only really come to loathe the baddies, and this she is not.

It's difficult to say more of Adrien's mother, or Jake, without spoiling the plot, but readers get to experience both of them through Adrien's eyes, as the writing is first person narrative, which Lanyon does very well - his standalone novel, Fair Game, is the only one of his I've read so far that's not in first person, and it's an excellent but more serious read than Adrien English.

Also brilliant in the cast of characters are Jean and Ted Finch who are part of the writing group that meets at the store, and Angus, who is sent by an agency to work at Cloak and Dagger in book one. His quietly spoken way, and Adrien's commentary on this, is hilarious. I kind of liked Guy too, but won't say more than that.

However, it is the main character that has made me fall completely for Josh Lanyon's books. Adrien is a lot like Christopher Holmes in Lanyon's ongoing Holmes and Moriarity series - both are dry, witty, sarcastic, whilst also being vulnerable and having experienced pain in their lives. I'm afraid I've fallen in love with 'Adrien with an e', which isn't good, as he's both a gay man and not real. Ah well.

So, my only issues with this series are thus: first, because Adrien's character is a lot like the main character in my own series there were times when I'd be reading, thinking, "Would Josh do / say / think that?" and then I'd remember what I was reading.

Secondly, I'm devastated I've reached the end. There's much to be said for knowing when to conclude a series, and this was definitely the right place to do so, but even so, I'm going to miss Adrien and Jake. I've been living with them for a month now, and I've got used to having them around.

In conclusion, the Adrien English Mysteries series is an excellent read - murder mysteries, the path of love running a complicated riot, dry, clever humour, and some of them even get to live happily ever after!

Thank you, Josh Lanyon. May your prolificacy continue.