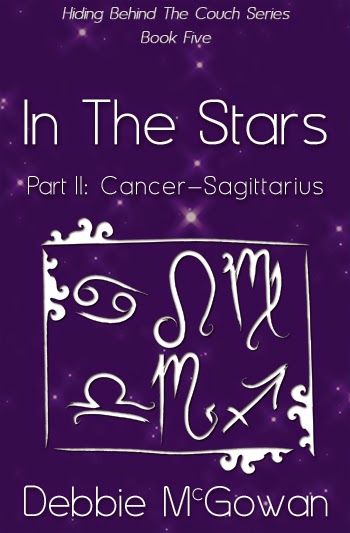 I've spent sixteen hours typesetting the paperback and formatting the ebook for In The Stars Part II today.

Am I inefficient?
Maybe.
Or perhaps it's down to the 210k, 572 page, fifty-five chapter leviathan I spawned... (yes, you read that correctly)

Better still (or worse yet), this is only the second half of the story of In The Stars, which spans a year in the life of The Circle - the nine characters around which the Hiding Behind The Couch series revolves.

Which is, of course, why I'm releasing it not only in two volumes, but also as twelve separate episodes.

Each episode is released in the month in which the related zodiac sign falls, so the first six episodes are already available (at time of writing). It doesn't have much else to do with astrology, to be honest, although the themes of religious beliefs, science, fate and fortune are key.

I'll explain more about the story in another post. Review copies available, author is happy to be interviewed, but after she's had some sleep!

IN THE STARS PART I

IN THE STARS PART II


In case you missed them up there...