Book Review: In The Present Tense by Carrie Pack 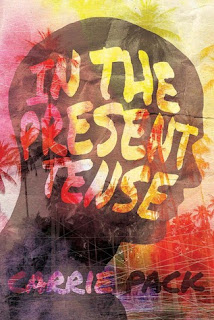 Title: In The Present Tense
Author: Carrie Pack
Publisher: Interlude Press
Published: 19th May, 2016
ISBN: 9781941530788
Blurb:
Miles Lawson goes to sleep dreaming of a future with his boyfriend Adam, but wakes to find he is married to Ana, an acquaintance from high school. When he learns he has been time traveling, Miles is consumed with finding a cure for his rare condition—and finding his first love.

Traveling more frequently, Miles assembles the puzzle pieces of his life and, in doing so, alienates his wife. As he loses control, Miles must realize that sometimes fixing your past mistakes means changing your future. But will he be able to convince Adam he is telling the truth before it’s too late?

Review:
In The Present Tense isn’t literary fiction. I appreciate this is a curious way to start a review – what the book is not – but most novels I’ve come across that take on topics of an intellectual/political nature in the way Carrie Pack does are, ultimately, vessels through which the author can show off their leet writing skills through a complex story arc, spectacular vocabulary and their ability to come up with the most convoluted sentences ever. It’s nice – if they’re aiming to appear on the A’ Level English Literature syllabus at some point in the future – but there’s too much clutter between execution of concept and the reader’s ability to just enjoy the story.

In short, Carrie Pack cuts the crap – which makes this book accessible to a wide range of readers – and gets straight down to the storytelling. And wow, what a story this is. It tackles issues around mental health and illness, and I’ve got to say, as someone who has worked/teaches in the fields of psychology/psychiatry, it is wonderful to read realistic depictions of mental ‘disorders’ such as dissociative identity disorder and schizophrenia.

I also want to applaud the author for portraying the horror of enforced psychiatric incarceration. The way it’s done is not ‘thrilling’ in the typical thriller novel sense, but it is thrilling. My heart was hammering so fast at times, and I felt nauseous – the same reaction I get to real-world oppression. I’ll admit, my worldview incorporates an anti-psychiatry stance, and I sense the author’s sentiments are not incongruent. We might have left behind the vast asylums of the past, but a diagnosis of an acute mental disorder is, for some people, tantamount to throwing away the key. We need to see these people in our stories if for no other reason than they are invisible in the real world.

That’s only part of the story, albeit a very significant part. The time travel is done so well, but there’s little more I can say about it without either repeating the blurb or giving away key elements of the plot. I, like most readers, have a brain that skips past chapter headings and subheadings, so I generally had to hop back a few lines and read the author’s helpfully included dates. Truthfully, I was too desperate to keep reading the story, so mostly I gave these a cursory glance before once more submerging into Miles’s world.

While Miles is most certainly the main character, we do get a few different points of view, and again, these are all clearly marked by subheadings, but they’re also easy to identify if you do just keep reading, like I did, into the night. I forced myself to stop at 92% to squeeze an extra day out of this story. It’s so good.

Finally, the characters…well, this is where the author has really hit it out the park for me. LGBTQ+ main character, the politics of mental health, time travel and damn fine characterisation. There’s no sweetness and light in here; all of the characters have huge flaws, like real people. Some situations cast them in a poorer light than others, and the emotional impact on the reader is the same roller-coaster ride we get from our interactions with people we know. The only character I was 100% onside with was Miles, even though at times I wanted to give him a good talking-to or simply remove him from the situation. The traits/behaviours distinct to Miles at different points in time were also a nice touch.

I loved In The Present Tense from beginning to end, and the sequel is out this summer (2018)! I’ll be at the front of the queue.