First up, sorry if you're feeling a bit like "Yeah, yeah, Deb, I know! You've got a book out today." With so many authors, so many books and the velocity of social networks, I have to send out the message on as many channels as possible. Hence, the overkill some of you might experience.

Conversely, you might be thinking "Oh, I'm glad I saw this blog post or I wouldn't have known you had a new book out." In which case, my work here is done. :)

Tabula Rasa is book two of the Gray Fisher trilogy (you can get book one - The WAG and The Scoundrel - for 99c if you're quick - links on the Beaten Track page). This series is a spin-off from Hiding Behind The Couch - you don't need to have read any of the main series to make sense of the Gray Fisher books.

The stories feature Gray Fisher and Rob Simpson-Stone, who were in the police together. The series is contemporary fiction with elements of (white-collar) crime and (LGBTQ+) romance.

Tabula Rasa Blurb:
After years of working for the police - both as a beat bobby and undercover - Rob Simpson-Stone is moving on with no regrets. It may be too late to rescue his marriage, but his relationship with his seven-year-old son, Lucas, is back on track. Rob's grown-up nieces might be a taller order, but he's prepared to do whatever it takes to prove they no longer need to worry that one day he won't come home.

Fate, however, has different ideas.

When Rob fails to arrive at his leaving do, his former boss/new PI business partner Gray Fisher can't understand why nobody else is worried Rob is MIA, never mind that Gray is pointlessly missing out on a night in with Will.

As the reasons behind the night's events unfold, Gray's past recklessness threatens to catch up with him, putting those he holds close in danger and forcing both Rob and Gray to forge reluctant alliances.

Yesterday, I spent a 'short' time putting together a video trailer. OK, it took me bloody hours, and I tried to coerce Nige into helping me, all the while knowing I'd end up watching over his shoulder and telling him how to do something he's expertly qualified and experienced to do. In the end, he did help with advice and managed to not splain to me - he seemed very proud of himself for that. :D

Also, it's our wedding anniversary today. We'll celebrate by...doing the same as we do every Thursday.

Excerpt (Rob):
Context: Rob and Naomi are having a pub lunch on the way back from a prison visit during which Rob sprang an unpleasant surprise on Naomi.


They sipped their drinks; their meals arrived. The silence continued, finally broken by Naomi’s request for ketchup and Rob’s unchecked reaction.

“You didn’t need to. Your face said it for you.” She deposited a large dollop on the side of her plate, clicked the lid shut and set the bottle down. There was a smile lurking behind that moody scowl.

Shaking his head, Rob tucked into his gammon and chips. “You and Lu would get on like a house on fire.”

“United in your love of ketchup. The kid puts it on everything—chips…”

“What are chips without ketchup?”

“Carbonara.” Rob nodded at Naomi’s plate. Almost to spite him, she swirled her pasta-loaded fork in the ketchup, covering it completely. Rob laughed, relieved the ice was starting to melt. “I’m sorry,” he said. “I should’ve warned you.”

“Were you worried I’d jeopardise your success in talking Freddie round?”

“No, nothing like that. I didn’t want to upset you. And for the record, it wasn’t my idea.”

“I’d gathered as much.” Naomi exchanged her fork for her glass. “It has Will Richards written all over it.”

“Does it?” Rob thought it had come from Gray—contrary to his claim it was Will’s scheme—because it was a DCI Fisher tactic too. Clearly, they were well suited.

“I can’t say much as it relates to an ongoing investigation.”

“Mmm.” She wanted to say more, and Rob wanted to tell her more. In spite of what he’d witnessed at the prison, he trusted her to keep it to herself, but it wasn’t solely his decision.

“You’ve got ketchup…” He subtly indicated her chin. She wiped with her napkin, but the ketchup stayed put. She tried again. Rob shook his head. She gave her chin one more broad wipe, to no avail. It was the tiniest spot and he’d only used it to redirect both of their attention, but this was possibly worse. “So what have you been up to?” he asked, attempting to move the conversation on again.

“Are you really going to let me go through the rest of lunch with ketchup on my chin?” She held out her napkin and leaned forward. “No spit,” she warned.

With a smile, Rob took the napkin and rubbed at the offending spot, but the ketchup was stubborn as anything.

“Everything all right with your meals?” A waiter stopped at their table.

Naomi quickly leaned her chin on her hand. “Yes, thanks.”

“Great, cheers,” Rob said. “Could I trouble you for a glass of water?”

“No trouble,” the waiter said and left, soon returning with the water. Rob offered thanks and waited for them to move on before he dipped a corner of the napkin into the glass and used it to successfully clean the ketchup away. The cool wetness amplified the heat radiating from Naomi’s skin, and Rob was once again fighting the urge to touch. Carefully withdrawing, he dropped the napkin onto the table and sat back in his chair, fingers locked and steepled above his plate.

“Nothing.” Rob clasped his hands tighter together, not yet safe from temptation. “Can I be honest, Naomi?”

“Actually, it was the same point, but I got sidetracked.”

“All right. Cards on the table. I’m very attracted to you. I have been since I met you.”

“When you thought I was Aaron’s wife,” she said. Her smile faltered, and there was a hint of worry there, but it made her no less beautiful. 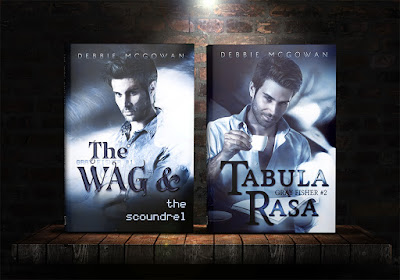