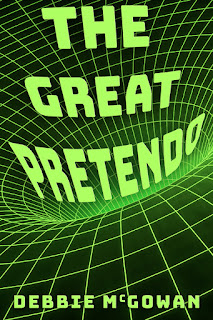 He’s a fast-talking, dishevelled inventor trapped in a world he never made. She’s a transdimensional renegade magician’s assistant trying to make a difference in a man’s world. Together, they fight crime! (inspiration: http://theyfightcrime.org)

The audience oooh’d as Pretendo circled the wooden crate, his final sword raised. Bend, flick, recoil… The blade flashed under the spotlights and plunged, piercing the lid, dead centre. As one, the audience gasped and held their breath.

Beneath the crate’s false floor, Shula waited out the seconds, knowing she’d be stuck a good while yet. Pretendo loved to drag out the sword removal part of his act even though the audience was only interested in seeing his ‘assistant’ emerge unscathed.

He was a fake. All magicians were, but that was beside the point. Pretendo wasn’t actually a magician. He was a thief on the run, and he shouldn’t have made it this far. Shula had flagged his passport with the portal authorities, but some…idiot had let him through. So, Shula did the only thing she could: downed a couple of TT pills, sent a 10–43 to the division, and hopped on the bus with him.

Now, they were here: Earth 6424/12bf4a with its bizarre and frankly illogical gendered hierarchy, which she’d discovered firsthand within minutes of arriving and before she could secure a stable 4G–HTL connection that would have forewarned of her instant demotion to second-class citizen.

Pretendo had leapt clear of the bus before it stopped and darted into the closest building, tripping over a sandwich board in his haste. The sign was still wobbling as Shula raced past.

There was little difference in the tech from one world to the next, but theirs was strange, new… Magic. Guaranteed to get them the gig.

Damned infuriating, not to mention degrading, cramped, boring…and itchy. Shiny, stretchy fabric that barely covered her mammary glands and genitalia—and the women here wore weapons on their feet. Still, with her holo-shield activated, it was good cover.

Whoosh. One sword down. Only seven more to go.

Shula gripped the handles and pulled, opening a six-inch gap. Shafts of light cut across the upper section of the crate. The whoosh of another sword’s removal was followed by a muted curse from the silhouette above.

That was the final sword. “Hold tight, I’m coming up.”

With the man’s weight, it took a fair bit of effort, but the clanks and rattles of the padlocked chains had stopped, and the lid was rising.

“Quick!” A clammy hand grasped Shula’s and pulled as she pushed, hoisting her upwards as Pretendo threw the lid aside, and, like jacks in a box, she and her crate-crasher sprang to their feet.

“Thank you, thank you!” Pretendo gushed and bowed to his whooping audience, oblivious to the added extra in his act.

Shula held her grin and curtseyed, muttering to her unwitting sidekick, “There’s a bar across the street. Wait there. I’ll find you and explain. Go!”

With her help, he scrabbled free and stumbled away, just making it offstage as Pretendo turned around.

“For my next trick, I will take this beautiful lady—” he lifted Shula’s hand to his greasy face and squelched out a kiss “—and saw her in half!”

By the time Shula reached the bar, she’d figured it out. Aside from the man’s dishevelled, shell-shocked appearance, he was pale, shivering and sweaty. It could’ve been flu, she supposed—the virus thrived on Earth 6424/12bf4a—but she didn’t think so. He raised his head, offering a weak nod.

“Here. Take this,” she instructed and popped a TT pill from the packet onto his quivering palm.

“What is it?” he asked, but not before he’d swallowed it.

“I don’t get travel sickness.”

“Quantum physics?” Shula guessed. Tim’s jaw dropped. “How did you get here?”

“We are,” Shula confirmed. “But not your London.”

“How many moons are there?”

“Orbiting Earth? Two, obviously.” He laughed like it was a ridiculous question.

Shula got up and beckoned him to follow her outside, where she pointed up at the sky and its solitary moon. “I think it’s safe to say it—whatever ‘it’ is—worked.”

“I was right! Wormholes are stable—”

“Some are,” Shula interjected. “However, yours is connected to a magician’s prop, which is not in the least stable, particularly given who the magician is.” She hooked Tim’s arm and marched him back across the street, but he broke free. “Professor, you must leave before it’s too—”

The theatre doors burst open. Pretendo emerged, puffing and panting, and hauled the crate into his stolen van. That was when he spotted Shula. He scrambled into the van and took off.

“Damn it! My shield’s failed.” She hailed a passing taxi and jumped in—as did Tim—and ordered the cabbie, “Follow that van!”

Well, this was a mess. Every twist, turn and bump, the crate rattled closer to the swinging, open back doors, and now she had not one, but two transdimensional trespassers. It was far from ideal. Although…

“Can you collapse your wormhole, Professor?”

“Good point.” But she could figure that out later. “I’m with the Transdimensional Crime Division, and I need your help. So, the wormhole…?”

“Can you collapse it or not?” Shula snapped.

“If you’re sure…” Tim pulled a device from his pocket, poked the screen a few times and shut his eyes. “Here goes nothing.” He pressed the screen one last time.

Up ahead, the van briefly expanded, and then shrank to non-existence.
flash fiction parallel worlds science fiction Sparkly Badger transdimensional