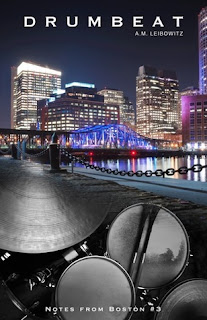 I realised today that I still haven't reviewed Drumbeat, which is shocking. It's been out for... [goes to look...cough] a while. OK, September 1st, it was released, and it was a while before that when I read it, because I struck lucky and got to beta-read. I honestly don't know what the process is like for other beta-readers, but for me it's like getting books on super early pre-release AND getting the chance to talk about the characters and events with the author. A private fan convention, essentially. I love it!

Drumbeat is the third book in A.M. Leibowitz's Notes from Boston series, and I've got to say before I get into talking about the story itself, I love these covers so much. How much? I've got them up onscreen as I type. They're exactly right for the series and for each story.

The observant will notice the series title and the book titles are music-themed, and the characters are all somehow connected to the performing arts (as well as to each other). In Drumbeat, we meet (again) Jamie, who is...a drummer (badum-tish) and Cian who is a hot Irish-American bi guy. Um, I mean, he's a dancer. Yes, that's what I meant.

Now, my job and hobby are such that I've read a few romances over the years. Not hundreds, but enough to get the gist of a few common tropes, and you can forget about those straight off. No friends to lovers going on here (or not between Jamie and Cian, at least). No enemies to lovers either. More a fairly ambivalent tumble into something that is more meaningful because it's natural and necessary. The challenges Jamie and Cian face independently are not instantly fixed by them coming together. Instead, there is a commitment to each other that is more than 'we met, fell for each other, the end'. While romance is in the mix, there is friendship, understanding, compassion, learning to communicate, acceptance. They're not 'perfect' for each other, and there are many obstacles still to be surpassed when we leave their story behind, but there's a definite rightness to what they have.

And there's also Sage. Bloody Sage. I almost wish there was a reason why he's such a sh*t, because it might stop me wanting to smush his face in every time I think of him. (Or boil him in a pan? That could work...) I get the same feeling when I meet people like him in RL, which I guess says it all. A.M. Leibowitz has captured the essence of...Sageness brilliantly. Pity he's an asshole, though. Sage is a lovely name. Still, I suppose everyone deserves one redeeming feature.

Each NfB novel (so far) focuses on two (or more) key characters, but it's really an ensemble cast, and anyone who's read books one and two will recognise many familiar names - Trevor, Andre (sigh), Marlie, Mack, Nate, Izzy...amazing, diverse characters and relationships. It's refreshing to read books like these with actual LGBTQ+ characters. The settings will also be familiar - I have somewhere a sketch of the club that I made while reading. The place is so vivid in my mind, I'm there with the guys, in this instance mostly watching Cian and his dancers. Obviously. Obsessed? Nooo... [whistles nonchalantly]

I've linked the books' titles to the publisher's pages, but here are some more links for where you can buy Drumbeat: 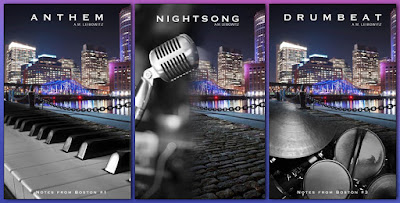