You know when you've beta-read books one and two in a series, and read the novella that came after (or, in fact, between) them, and then the author contacts you and says, "Hey, d'you fancy beta-reading book three?" Yep, that! Because, honestly, when someone writes as brilliantly as Jeanne G'Fellers does, beta-reading is a free book, and I kind of feel like I cheated the author out of a sale. Well, the least I can do is tell you what makes this novel (and series) so awesome. 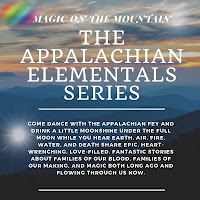 So the first thing is the series itself: Appalachian Elementals is, as the title indicates, a series set in the Appalachians…featuring elemental beings, although not just elementals. The mixing and mingling of different kinds of folk, both magical and non-magical, is a major part of the charm of this series, which for the most part in books one and two is contemporary fantasy fiction. I say 'for the most part' because the world Jeanne G'Fellers has created is as much about the characters' pasts as it is their present, and when we're dealing with elemental beings, they are as ancient as the Earth itself.

Striking Balance is book three in the series, and while it is stand-alone and doesn't require prior reading of books one and two, if you do happen to read them in order, like I did, you get the buzz of recognising characters you already know waaaay in the future, as Striking Balance is historical fiction (late-1700s), in some respects lending insight to the events that take place in Keeping House (book two - read my review). This is one of my absolute favourite literary devices, where I turn into Buddy from Elf, almost bouncing in my seat and yelling, "I know him! I know him [her/them]!" at the page - or screen. I'm the same with cameos in movies and TV series (you would not believe how excited I was when Spock turned up in Discovery).

Speaking of screens, this series is another one that needs the Netflix treatment - I could waste hours imagining the CGI complexity of it all. But I digress…

Striking Balance centres on one Benjamin Schnell, who sparks into existence on page one and only grows brighter and more real as he leads us through his day-to-day life, relatively ordinary at first but becoming stranger after he is injured (damn, this is hard without giving spoilers). What I love most about Ben is that through each and every experience, new or old, terrifying or delightful, he remains deeply analytical and pragmatic. I don't mean he's emotionally cold; far from it. There were moments his narration had me sniffling back tears, still others where I couldn't help but giggle, or indeed rage at the injustice, or shriek in frustration. Ben is wry and quick-witted, soft-hearted and compassionate, but he's also a fighter, ever determined to find solutions; to succeed. But within all of that, he also has to learn to trust both himself and those around him - his close friend (soul mate) Conall in particular.

As mentioned, the cast of characters includes some I'd previously met in books one and two, and once again I can only applaud the author's stealth capacity for weaving diversity into each and every story. If we're talking LGBTQIA+, the whole rainbow's in this series, and it's seamless, subtle, just there as part of the fabric of the universe. How it should be.

Finally, there's the world-building, which is, as ever, spectacular. I'm one of the small percentage of people who can't visualise, so I can't really tell you what it looks like, but there's magic and mountains and rivers and farms and trees, so…maybe like Middle Earth with more mountains and less colour saturation? What I can tell you is I was immersed from beginning to end, literally lost in the elements.

Striking Balance is book three in the Appalachian Elementals series by Jeanne G'Fellers and is available in paperback and ebook editions.