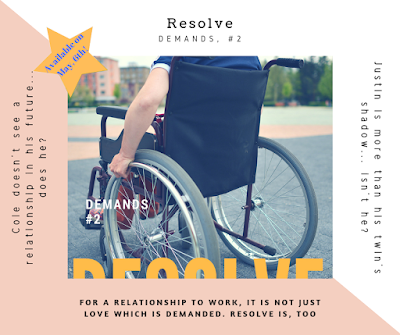 BLURB:
For a relationship to work, it is not just love which is demanded. Resolve is, too.

Cole has his senior year of college and a photography business to worry about, so he could really do without the multiple sessions with physiotherapists his parents force him to go to. It leaves little room to consider romance as a choice for him.

Pool instructor and avid swimmer Justin has always been his twin’s shadow. Where Aaron goes, he follows. He may not have much of a social life outside of his twin, but he loves his job and all the extra swim time he gets. He doesn’t think that he’s lacking anything.

Then Justin’s booked for a photo shoot with Cole. Being together, as right as it feels, also means they’ll have to come face to face with their belief systems. They must find the resolve to be their own person, or they could lose it all –themselves included.

Resolve is the 2nd book of the Demands series. Although they can be read as stand-alones, characters from previous books will make multiple appearances throughout the series.

CHARACTER PLAYLISTS:
(I love these! They say so much about the characters. :))
Justin’s Playlist
Cole’s Playlist

Justin is all about swimming, but he’s also very introspective. He wants songs that don’t make him lose focus, which he can chill with, so not even all of them have vocals.

Cole’s music taste is… Edgy is not the word, but… He likes powerful lyrics and guitars and songs he can feel understood by, even though he’s not fully hardcore (there are a couple of songs which are “edgier” for the times he’s really mad at the world, but he doesn’t allow himself to be that mad for too long).

ABOUT THE AUTHOR:
Emily Alter is a pansexual author of LGBTQ+ romance. She lives in Spain, although most of her time is spent in an imaginary world with her characters.

A hopeless romantic, and a psychology student, writing characters has always called to her. Writing romance, the kind she is represented in, seems the perfect combination of the three things she’s the most passionate about.