Poor Josh has been stuck in the loft for five years.

That's how long I’ve been working on Alumni – Reverberations. It’s part of the Hiding Behind The Couch series and started life as Alumni (Season 8). That was in 2017, after I published Reunions (Season 7 – which ended with Josh bravely climbing that ladder), but for various reasons, I had to set Alumni aside.

Even now, I can’t honestly say the end is in sight, but it’s a lot closer than it was, which is good news for Josh.

OK, minor spoiler: he does eventually find a way down from the loft. I know because I wrote that part about three years ago. The trouble was, the further I progressed with this instalment, the harder it became…until I realised I wasn’t writing Season 8. I was writing a renaissance of Ruminations. At last, it all made sense.

So here we are, five years later, and Alumni – Reverberations is still a work in progress. I haven’t decided on the final cover other than it being Ouija-board inspired. However, I do, astonishingly, have a draft blurb! Note: if you’ve read Ruminations but nothing else from the series (or you’re reading the series and haven’t got as far as In The Stars – Seasons 4 and 5), there is something of a spoiler in this blurb, so you might want to look away now.

Mysterious happenings are mounting up for Josh, Sean and their estranged alumni.

Josh Sandison-Morley was born a sceptic. Why else would he insist there’s no such thing as ghosts when he’s eliminated every probable and possible explanation for the noises in his former therapy rooms?

Sean Tierney’s having some ‘performance issues’. His GP says there’s no physical reason: his blood pressure is under control, and he’s stayed off the booze, ergo it’s all in his head. In the circumstances, being a palliative clinical psychologist isn’t proving (self-)helpful.

Despite two decades of friendship and their grand plans to open a private psychotherapy centre, neither man confides in the other. That is, until news reaches them both, via different avenues, that their experiences are but part of a bizarre cluster of unexplained phenomena, for which there is only one common denominator: Jess Lambert.

Whether real or the product of overwrought imaginations, Josh, Sean and their alumni must lay to rest the spectre of their once-belovèd friend…or admit defeat and crawl back under the safe, weighty stones of the jobs and relationships they’ve left behind.

My goal is to publish Alumni – Reverberations in 2022. Seems doable.

Deb
aka Mother Goose
(My younger daughter changed my name on the title page waaaay back and then sent me a frantic message some weeks later, worried I’d published the book with the wrong author name – the name she and her sister have given me (see also: Goose Face). It’s still in the document… :D) 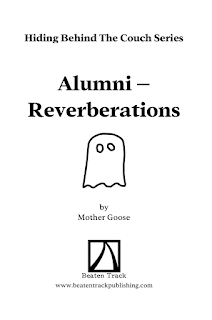