#WIPpet Wednesday - The WAG and The Scoundrel (snippet 3) #amwriting 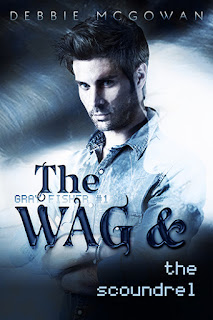 So, it's the 3rd August: 3x8=24 sentences of my work in progress, The WAG and The Scoundrel, which is a white-collar crime mystery (ish) / romance (ish) (LGBTQ). It's the first book in the Gray Fisher Series, which is a spinoff of Hiding Behind The Couch. It's scheduled for an October release. :o

There are three main characters in The WAG and The Scoundrel. So far, the WIPpets have focused on Gray and Will. The third character is police officer Rob Simpson-Stone - a previous colleague of Gray's. In the scene below, Rob has not long been in bed when his phone rings.

"My name's Naomi. Are you PC Simpson-Stone?"

"Yeah, this is Rob Simpson-Stone. How can I help you, Mrs. Tanner?"

"It's about Aaron. He's in danger. Could we talk face-to-face?"

"Is he in immediate danger?"

Rob threw the covers back and sat up. "Where are you, Naomi?"

That was the address Aaron had given to Rob two weeks ago - his mother's place, therefore, Naomi's mother-in-law's. It seemed like an odd setup. There again, Rob didn't suppose all marriages ended in acrimony.

"OK. I'll be with you in thirty minutes." He ended the call and spent a few seconds staring at the screen. So it had begun: the antisocial hours, the late-night calls.