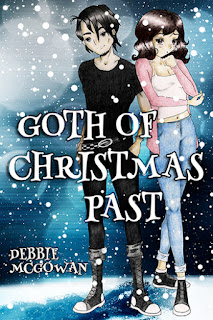 All of the news!

I've been so busy this past couple of weeks, I didn't blog at all last week, and my house is wall-to-wall dog hair, but...

Goth of Christmas Past is written, and alpha-read! Thank you, lovely husband :) Nige is a sound/lighting tech, which is very helpful when it comes to feeding back on a story that extensively features a recording studio ('you mean haze, not smoke, never tell them it's smoke or they cough and complain', and 'why is he up a tower when they've got programmable lights?' and 'try re-patching cables instead...' and so on and so forth), except that now he wants a job there, LOL. It's also with the first beta-reader, who tells me it's got a good start. Cheers, Al. x That's...a good start! :)

My next mission—aside from 'hinting' that I need more beta-readers—is to come up with a series title. Why? Well, this is part of Hiding Behind The Couch, but it's kind of a spin-off too...HBTC TNG? Or something like that. Not. I'm thinking along the lines of 'Assets' but catchier. I have time to decide, anyway, but feel free to throw suggestions my way.

Also, I've been playing around with the new version of the cover, which is—hopefully—more 'New Adult'. Again, the illustration is the work of the super-talented Emma Pickering. No doubt, I'll tweak and refine a bit more before I finally settle on it being right.

Any readers of HBTC will know the series centres on a group of nine(ish) friends – The Circle: Josh, Shaunna, Dan, George, Adele, Kris, Eleanor, Andy, Jess and Sean. Krissi in Goth of Christmas Past is Shaunna's daughter, and Jay is Krissi's best friend.

The setup for this series is much the same: although Krissi and Jay are the central characters in GOCP, there is a broader group of friends/colleagues who will be more prominent in future stories. Probably. Depends on them, really. ;)

I've posted snippets featuring Krissi and Jay, so...it's time to meet someone else. This snippet features Karen Deakin, Krissi's former assistant manager, and Karen's wife Bridget. That's an L and a B, in case you're wondering.

As for maths...erm...there are fourteen letters in the first line?

Karen ended the call quickly before she eavesdropped any further. That put a bit of a downer on the evening, and it hadn’t even begun yet. She was surprised at Krissi, and disappointed. They’d worked together for five years and been friends since the start. In all that time—even when Krissi was her manager—Karen had never known her to not speak her mind.

Bridget’s car pulled up outside, which stopped her dwelling on it for the time being; she’d have to say something to Krissi later, though, or she’d drive herself nuts.

“That off-licence is rubbish.” Bridget marched past on her way to the kitchen. “They don’t sell crates of beer.” She brusquely tugged two four-packs from the bag and shoved them into the fridge.

“That’ll be enough, though, won’t it?” Karen said. “Krissi’ll be driving. I’m not even sure Wotto drinks.” She tried to recall if he’d been on the beer at their wedding, but it was a bit hazy.

“For tonight, yeah. But it’s nice to have it in the house at this time of year.” She closed the fridge and turned to Karen with a suggestive grin. “Especially as you’re not breastfeeding anymore.”

There was that, she supposed.

Bridget kissed her on the way past. “Going for a shower.”

“OK.” Karen watched her leave and sighed. She wanted to still be breastfeeding, but Molly had never latched on properly, making it unbearably painful, and there was nobody offering support. Or that’s how it felt.