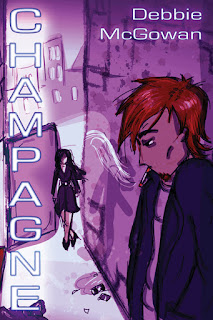 I’m at a bit of a loss today. I’m still trying to…oh, I don’t know anymore, lol. Reunions is driving me nuts! So, I decided to step away from it for the purposes of this RainbowSnippet and go with something from the opening pages of Spread Your Wings (the opening pages being all I’ve written so far).

Brief explanation:
Spread Your Wings is the sequel to Champagne—my first novel, originally published in 2004. I wrote it in the mid-1990s, which was a very different era in LGBTQ fiction, added to which, the story covers the first half of the 1980s. Spread Your Wings is set ten years later (1995-ish). Champagne doesn’t have even so much as a ‘happy for now’ because, honestly, none of the characters deserved it.

Spoiler alert for anyone intending to read Champagne! (Highlight below to read synopsis.)
Champagne tells the story of Sammy, a young man who goes to London in search of his abusive father and instead stumbles upon a seedy revue bar, where he promptly falls in love with Champagne, a drag queen (off-stage name Charles). Champagne is manipulative and an alcoholic. Frank is the son of ageing flamenco dancers who also perform at the revue bar. Also a dancer, Frank has been working in Spanish holiday resorts but returns to London for the close of the revue bar, which Sammy has bought with his inheritance from his grandmother. After Champagne emigrates to NYC, Sammy and Frank become lovers, but theirs is a destructive, violent relationship, and Sammy is still in love with Champagne. Three years later, when Champagne comes back onto the scene, their relationship is already at rock bottom, and Frank gives Sammy an ultimatum: it’s him or the club. At the same time, Champagne pleads with Sammy not to sell the club.

Here's the snippet (9 sentences, or it wouldn’t be complete):


“I heard Charles died,” Frank said, a casual announcement delivered as he turned to face Sammy and adopted an arms-crossed pose, knee drawn up, heel resting against the wall behind.

Sammy shifted his gaze from the coffee maker and over Frank, settling on the point of contact between Frank’s foot and the centre of a printed sunflower. The wallpaper was gaudy and outrageous; so, too, were the furnishings—yellow doors, white timber chairs with orange, red and yellow seats, a leaf-motif green and yellow tablecloth. In the midst of it all, Frank’s monochrome attire—black pants, white vest, bare feet—was vivid and powerful.

“I can’t recall who told me now. There were so many men.”

“At the club?” Sammy asked, seeking a clarification to strike out the double meaning of Frank’s words. Not an admission—Frank didn’t sleep around, or never used to—but another jab of the pain stick. Sammy deserved it.