Book Review: The Descent of Man by Grayson Perry 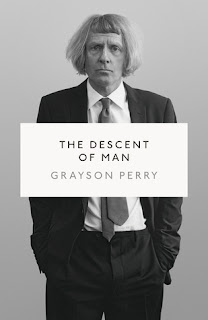 Blurb:
Grayson Perry has been thinking about masculinity - what it is, how it operates, why little boys are thought to be made of slugs and snails - since he was a boy. Now, in this funny and necessary book, he turns round to look at men with a clear eye and ask, what sort of men would make the world a better place, for everyone?

What would happen if we rethought the old, macho, outdated version of manhood, and embraced a different idea of what makes a man? Apart from giving up the coronary-inducing stress of always being 'right' and the vast new wardrobe options, the real benefit might be that a newly fitted masculinity will allow men to have better relationships - and that's happiness, right?

Grayson Perry admits he's not immune from the stereotypes himself - as the psychoanalysts say, 'if you spot it, you've got it' - and his thoughts on everything from power to physical appearance, from emotions to a brand new Manifesto for Men, are shot through with honesty, tenderness and the belief that, for everyone to benefit, upgrading masculinity has to be something men decide to do themselves. They have nothing to lose but their hang-ups.

Review:
The Descent of Man says absolutely nothing new. The illustrations are great, the style is accessible, and I broadly agree with what the author has to say, but the whole thing feels an awful lot like 'mansplaining' to me. Perhaps I'm not the intended audience.

Grayson Perry - a cross-dressing, white, middle-class heterosexual man (by his own frequent in-text admission) - essentially rehashes feminist arguments from the past half a century, making 'bold' statements that invariably begin with a cautionary and unnecessary 'I think'. He doesn't need to think; feminists have been saying this stuff for decades.

But isn't that the age-old problem of patriarchy? Women can scream until they're blue in the face and nobody hears them. Enter a cross-dressing, white, middle-class heterosexual man and suddenly other men stand up and take notice.

For that reason, I'm glad Grayson Perry wrote this book, even if he has 'borrowed' feminist analysis and presented it as his own. Perhaps a man or two might read and take note.