The MC did what? Emily Alter - Who Loves You #qsf #lgbt #mmromance 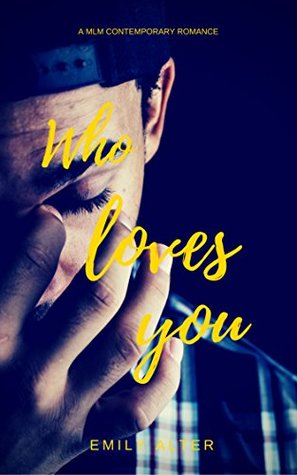 Well, author Emily Alter wins the prize for the fastest time of getting me from 'the MC seems like a nice guy' to 'what the hell is he doing?!' :D

Emily's a new-to-me author of LGBT+ fiction and fellow psychologist, and we met via the QSF group on Facebook. I'm currently reading Emily's recent release, Who Loves You; I'm a couple of chapters in and enjoying it very much so far. Kudos to the author for delving straight into mental health - realistically and, I think, respectfully. I've had a few encounters similar to Ben's. Very well captured.

Also, Julian sounds like an awesome dude - cheese, mushrooms and anchovies in sandwiches. I think Julian and I could make beautiful suppers together.

OK, back to it. I'm about to meet Claude! I think they're non-binary. (Yay!) Guess I'll find out soon enough.

I'll do the full review once I've finished it, although I'm a slow reader with a lot of books on the go, so it might take me a wee while. :)

Blurb:
For as long as Ben has been a YouTuber, and no matter how successful, he’s never been able to reveal the truth about his past, which seems to keep haunting him every time he tries to move on. His breakup with fellow YouTuber Owen Danniel, and the drama it ensues, don’t help make it better.

It's because of an appointment with his primary doctor, and an unfortunate encounter, that his luck may start to change. His name is Julian Yates, he loves cheese, mushrooms, and puts anchovies in his sandwiches for reasons Ben can't begin to fathom.

When Julian fails to remember what can happen if he’s on camera for one of Ben’s vlogs, they’ll both have to face their biggest, sometimes most irrational fears. Will Ben be true to his word as a hopeless romantic and put Julian's well-being above that of his channel, or will he give up on a relationship that’s barely started? What about Julian? Will he work on the unresolved issues that make him believe he's only good for one thing, or will he clam up at the first sign of rejection?