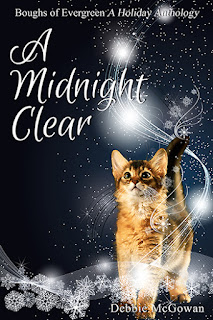 Slight blog overload this week, but life is unpredictable, so I'm posting a few days early.

My Christmas novella, A Midnight Clear, is available for free until July 31st in the Smashwords Summer/Winter sale (use SFREE at checkout). If you're not a 'Christmas in July' person, you could download it and save it for later. ;)

It's a cold, desperate December when a young girl flees home, in search of food, shelter and the real Santa Claus. Stranded in George and Josh's hometown, she discovers that the spirit of Christmas can be found in the most unexpected of places. Includes the story of The Little Match Girl, by Hans Christian Andersen.

Length: 26,000 words (75 pages) approx.
Suitable for younger readers and adults, aged 12+.
A stand-alone story from the Hiding Behind The Couch series.
Also part of Boughs of Evergreen - A Holiday Anthology (proceeds to The Trevor Project).

The person in front of him startled and sat up quickly, banging their head back and making the whole shop window judder with the force of the jolt. The girl - he assumed, though she was barely old enough to say with certainty - glared up at him.

"Fine," she snapped. She closed her eyes again. George didn't know what to do. Ask if she needed help? If she needed money?

"I, err..." he began, then nothing else. Maybe he could just offer her some money - enough to buy a sandwich at the garage, although it was cold and she could do with finding somewhere inside. He pulled the change from the cigarettes free of his pocket and examined it. A two-pound coin and a few coppers wasn't going to get her very far, and he felt it would be insulting to offer it. Being homeless didn't make her worthless. He put the money away again. OK, so twenty quid was a bit on the generous side, but that's all he had. He approached and crouched in front of her, trying not to intimidate.

"Here," he said, offering the twenty-pound note. She glared at it and then at him.

"Sorry?" Her response surprised him, and it took a few seconds for the meaning to register, at which point he lost his balance and nearly fell backwards. He righted himself and adjusted his position.

George laughed to cover his embarrassment. He must have looked really stupid. "I didn't think you were. I mean..." He paused, trying to gather the words to explain his thinking. "It's cold," he said, and it was. If he spent much longer in the same position he'd need her help to get back up again. "I thought maybe you could go to the twenty-four-hour McDonald's and..." He was probably stereotyping, he didn't really know, as it was the first time he'd properly talked to a homeless person, but he imagined they didn't get much opportunity to eat, or else why would there be soup kitchens? "I don't know," he hedged, trying to make the advice sound like it wasn't him telling her how to survive the bitter December night. "Hang around the place, munching fries really slowly, or something? Stay out of the cold awhile."

She was still studying him suspiciously, and he didn't know what else to say to convince her.

"Really," he said, leaning a little closer. "Take it."

She took it finally, and George carefully stood up. It was so cold. How was she even lying on the floor? It was overwhelming him; he turned quickly so he couldn't see her anymore, and stepped off.

"Thanks," she called after him.

He looked back at her and smiled, trying not to notice the desperation, the sadness in her eyes. He gave her a courteous nod and returned to the car, fighting to clear his mind of the image of her face. The engine started up and the heaters blasted him with warm air. He turned them off, the guilt too powerful to appreciate their luxury. The car stereo kicked in; another Christmas song. 'Let It Snow'. It had to be the first year ever he was wishing desperately that it wouldn't.