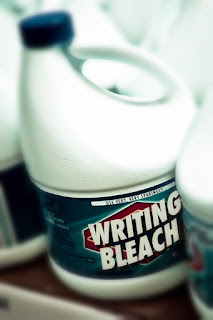 On Pinterest this morning, I saw a list of 'six things that make your writing look amateurish' or some such condescendingly arrogant title. I visited the linked page, which had been liked sixty-one thousand times!

Some readers may not be surprised to find out that in my first paragraph, I hit three of the six 'no-no's listed. For the curious, I used an -ly word (they're like swear words, but more swearly-er), and italics for emphasis (bad, bad, bad), and...some other thing. Oh, yes. I did that thing where the thing is doing a thing for which there is no thinging word for it and you're not Shakespeare (or Stuart Ayris), so the chances of getting away with making up your own word are, at best, slim.

Do I sound like I'm mocking? Good. Because I am. Wherever authors look, there are 'experts' telling us how NOT to write. Well, balls to all that.

My advice, for what it's worth, is this: just write the damn story.

The fussing and editing comes later. And even then, if there is a good reason for doing something, even if all those experts say you shouldn't, do it anyway!

Like, for instance, I have this character called Josh. Regular visitors to my blog may have met him before. ;) Josh is the main character/narrator of Hiding Behind The Couch, and he has a distinct way of speaking, which involves superfluous deployment of complex vocabulary.

Now, 'the rules', according to all the internet writing gurus, command we 'keep it simple - don't utilise when use will do'. Except...no. Sometimes, 'utilise' carries a different connotation to 'use'.

Aside from that, there's this other rather more salient thing (be specific... ad nauseum, meh) when it comes to Josh: he uses language to show off his intellect and neutralise perceived threats in social situations.


The other peculiarity he has is to use really+very to describe the strength of his emotional response.

"When you get home from work, I'll explain it to you. Flirting 101."
"Might be useful. That's really very dangerous. Do I do it a lot?"
(In The Stars Part I: Capricorn–Gemini)

"Not as silly as me," Josh admitted, feeling really very silly for jumping to conclusions. "The washing machine's got a cold wash setting. That should do the job."
(Two By Two)

He does it a lot more in my head than he does in what's written on the page because the grammar Nazis are after me...Agh! Run for the hills!

This example I include to illustrate that, to me (which is important - this is my opinion, not another subset of rules to be universally adhered to), character development and authenticity trump mindless compliance to dos and don'ts.

That said, all of us are guilty of overusing certain words, and these can change with each story we write. We may, on a revisit, find more descriptive verbs, more specific nouns, but the story needs to be written first (oops, there goes some passive voice).

So, once you've written the story, here are some tools that might prove useful. Or not.