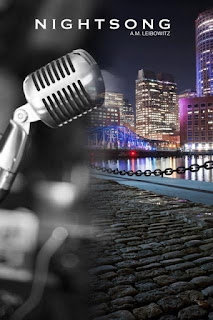 Blurb:
Nate Kingsley is a master at messing up. Out of jealousy, he outed his best friend in a public and embarrassing way. Now he’s doing his best to make up for his crimes, but it’s left him empty and frustrated, unfulfilled even by his career as an opera singer and creative director. He enters an unsatisfying relationship he keeps hidden from his closest friends. When that ends on a disappointing note, he seeks solace in his crush on one of the drag queens performing at his favorite club.

Izzy Kaplan is an EMT by day, a drag queen named TaTa Latke by night. He hasn’t been in a relationship since his divorce from his wife, despite the best efforts of his mothers and his work partner. He avoids their suggestions in favor of attending the opera alone to see the gorgeous baritone who’s caught his eye. He knows it’s just a fantasy, but it’s easier than starting over.

A charity performance to benefit a local youth shelter and clinic puts them in each other’s lives in an unexpected way. They begin to emerge from their relationship disasters, slowly building trust. But unknown to themselves or each other, they are facing separate health crises that might be enough to send them both running the opposite way. It will take drawing on the love and strength of their friends and families to bring them back together again.

Notes from Boston is a series about four friends navigating the ups and downs of life, relationships, and their music careers in the historic city. Book Two follows Nate in the aftermath of Trevor Davidson’s messy coming out as a bisexual Christian singer in Notes From Boston #1: Anthem.

Review:
Nightsong by A.M. Leibowitz is the stunning second instalment in Notes from Boston - a series that is LGBTQIA fiction at its finest. The stories revolve around a central core of characters, touching on their relationships with family and friends, their work, religion, love, romance, health, day-to-day challenges...you know, all that life stuff.

I read Nightsong - book two - first, which is not something I usually do. Indeed, my preference for reading series in order used to be so strong I wouldn't dream of reading a later instalment before the first one, and I'd avoid the blurbs for future books because they always contained spoilers.

Given how difficult it is to write spoiler-free sequel blurbs, it seems impossible that an author could write a sequel that is almost free of spoilers, but some can, and do. One such author who does this brilliantly is A.M. Leibowitz.

It is intentional on the author's part, and whilst it could, potentially, lead to gaps in readers' knowledge of past events, this is not the case with Notes from Boston, as each instalment focuses on specific characters. There are some longer story arcs relating to those past events, but having incomplete knowledge of these only makes it more real. We don't know the past of new friends; it's something that is slowly and incompletely revealed to us, shaped by our mutual acquaintances, how much the friend wishes to share, our own perceptions, context, and so on. 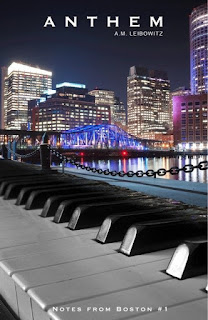 With Notes from Boston, I've discovered this is a bit like getting two for the price of one. I read Nightsong and formed some fairly strong opinions about some of the characters (Nate and Trevor in particular). Then I read Anthem (book one), and my thoughts and feelings shifted. I fell in love with Andre, who was a bit different from how Nate painted him in Nightsong. I also felt a bit less blah about Trevor, although I think I could probably forgive Nate for anything. Revisiting Nightsong, post-Anthem, is like shifting from camera one to camera two - it's a lot of fun!

Unsurprisingly (considering the series and book titles, and the characters' professions), there is a musical quality to the narrative. It's subtle and clever, with slight shifts in sentence structure and word choice - particularly in the more emotional/intimate scenes - that are like dynamics marked on a musical score. Whether this is a conscious device or the author's unconscious magic at work, I don't know, but there is nothing accidental in this novel. Every thread leads somewhere, and it all culminates in a grand crescendo.

The cast of characters is diverse, and many forms of relationship are reflected; it is a wonderful thing to see this represented/celebrated in fiction. Nor does the author shy away from writing about life's challenges, which again, brings a sense of reality to this fictional world. It's also there in the intricacies of the relationships and in the dialogue, and how often I thought, 'yep, that's typical Mack' (or whoever).

I love reading book series. I'm one of those readers who go for total immersion in a fictional world, and if the author gets it right, the book hangover is awful. But if I know there's more to come, that lessens the blow somewhat; I can keep hold of those characters and the relationship we've established, imagine we've shared a vacation together, and start planning the next one.

And there is a next one (at the very least). Until then, I'll be staving off my Notes from Boston craving with the snippets on A.M. Leibowitz's blog.