It's Life...but not quite #amwriting 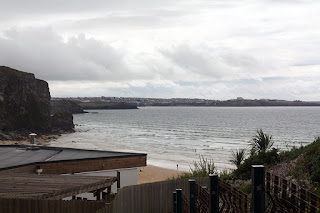 I've just finished re-reading The WAG and The Scoundrel (Gray Fisher #1) in preparation for writing Tabula Rasa (Gray Fisher #2) - or, at least, making a good start on it - during July's CampNaNoWriMo. It led to a startling discovery (which I mentioned in my RainbowSnippets post on Saturday):

I'd accidentally situated characters from two different stories in different series in the same place at exactly the same time!

On one level, that's rather fun, particularly as the location in question is a close approximation to Watergate Bay in Cornwall (pictured, with Newquay in the distance), which is quite possibly my favourite place to be. I say 'possibly' because I'm no longer sure if it's the real version or my fictional one that I love most - a point I'll come back to shortly.

So, my first response was 'how cool!' and it gave me lots to ponder. Would the characters have noticed each other? What would have happened if they had? Would they have chatted? Ignored each other? Is there a story in there?

Then another thought dawned on me. In both cases, I'd described the weather, and it didn't match!

Did I panic? Noooo. Did I consider rewriting the scene in either story? Not at all. (Hah!)

Anyway, I'm pleased to report (you can be pleased with me if you like) that it wasn't exactly the same time; it was on consecutive days.

In The Making Of Us, Jesse reports Friday's weather as:


No rain today, but it was cold enough for me to have dug my giant hoodie out of my bag and brought it to the beach with me, although not quite cold enough to put it on.

Whereas in The The WAG and The Scoundrel (Saturday afternoon), Gray observes:


The wind wasn’t strong, although it was bitterly cold, which Gray had anticipated, and he’d brought a coat, hat, scarf and gloves. He put them on and zipped his coat right up under his chin before venturing down the slipway onto the beach.

And it's English weather, in November, so all is well. Phew!

It's not the first time I've slipped up with canon, although it doesn't happen often, and it's generally not disastrous...

Well, there was the time I counted Krissi's age from her first birthday instead of her birth and had to adjust ALL of the characters' ages to match. That was in the first edition of Hiding Behind The Couch (Tracy, if you're reading this, it's the one you have on your bookshelf), and it's the sort of detail that editors are unlikely to notice. In fact, the only person who probably will notice is the author.

The bigger and more complex a series becomes, the more chance there is for these errors to sneak through.

I'll confess, here and now, that I get creative and write some of those smaller 'anomalies' into the stories. After I wrote The Harder They Fall (HBTC #3), I put together a calendar and a list of characters, mostly to keep track of characters' ages, but also because In The Stars (HBTC #4 and #5) was a logic puzzle of epic proportions (as in 382,000 words with something like half a dozen parallel/crisscrossing story arcs).

However, as I hadn't pinned the first novel to a 'real' year, the days and dates didn't match up to real years, and it all comes back to Krissi's birthday. Her 21st birthday is on a Friday (HBTC #1), so I took that day/date and built the calendar from there (using PHP - I'm not even thinking about the mess caused by the error I've just discovered whilst writing this blog post).

Thus, the calendar system for Hiding Behind The Couch is based on AJ (Annus Joshy :D). That's no bad thing - from the point of view of distancing reality from fiction - but it's a bugger to work with when I'm writing the stories.

Of course, I had to complicate matters further by writing a crossover between Hiding Behind The Couch and Checking Him Out, although when I wrote Hiding Out, I tried very hard to make it a single collision between the two worlds, which ends with this (not a spoiler):


“So you didn’t think much of Norwich then?”
“Mmm…it’s a nice place, but…well, it’s like another world, isn’t it?”
Josh slowed at traffic lights and met Libby’s gaze in the rear-view mirror. “Yes, it is,” he said.
The lights turned to green and they pulled away, heading back to their hometown, and to their own world.

Except...I'm currently working on a second crossover (No Filter) and they're not, actually, different worlds. When I wrote Checking Him Out, I was very lucky to have author Rick Bettencourt advising me on the parts of the story set in Boston (whence Rick hails), because Google StreetView is great, but it's not enough.

That, for me, was the distinction between the series: I'd deliberately set HBTC in a fictional location with no name - even though the characters visit Manchester and other named locations from time to time, and secondary characters live in named locations - whereas I'd set CHO in a real, named-on-page city.

The problem then becomes when I write an instalment that focuses on a secondary character in one of those named locations, which is the case with my main work-in-progress, To Be Sure (featuring Sean's mum, who lives in Derry, NI).

In the end, the locations in all my stories, whether identified by name or not, are fictional representations. Sol's hometown is somewhere in Yorkshire, name unknown; Norwich University doesn't exist (the uni in Norwich is the University of East Anglia). Magda Inc. Boston doesn't exist. Josh and Sean met at what would, geographically, be Keele University in Staffordshire, and they work in what is probably Edge Hill University, West Lancashire. I could even point to rows of terraced houses in West Lancashire villages that 'could be' where Josh and Sean live - likewise for the rest of The Circle.

The fictional depictions are an amalgamation of different places I've visited (really or virtually), give or take a few creative tweaks. Even 'the surfing bay in Cornwall' that appears in HBTC, CHO and Gray Fisher is not quite Watergate Bay.

On which note, I'm dogsitting this week for my mum, who is on holiday in Cornwall. Maybe she'll bump into Matty's nan at the shops! ;)

Thanks for reading!
Deb x
canon Checking Him Out Hiding Behind The Couch Hiding Out Watergate Bay words collide writing process