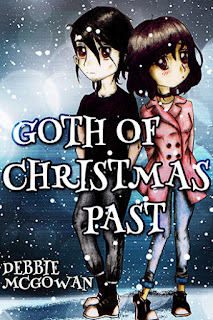 WIPpet Context:
I’m still snipping Goth of Christmas Past. This follows more or less straight from last week’s snippet in which Jay was contemplating vending machine soup. Note (to explain the second paragraph): Hadyn has OCD, although he has just been handling a dusty Christmas tree…

Emma—my wonderful illustrator—has come up with a second version of Jay and Krissi, which is awesome, and now I’m in a dilemma whether to keep the original (pictured) or go with the new one. I think I know what to do, but I”d appreciate your thoughts.

QUESTION: Based on the current cover, what kind of story would you expect?


[Jay] “Is the hot chocolate working?”

“It was earlier.” Hadyn was already on his way upstairs and continued in a hasty but controlled manner all the way to the toilet.

Jay eyed the machine and then the coins in his hand. He’d either get a half-decent hot chocolate or lose 50p. He decided to risk it and fed three twenty-pence pieces into the slot. The display registered 40p. He added another 20p. The display remained unchanged. On the off-chance it was a glitch in that rather than the mechanism, he pressed the ‘dispense’ button. Please insert the correct amount. Jay hit the ‘return money’ button, but the machine wasn’t having that, either.

“Keep it,” he muttered and walked off before his fantasy of taking a sledgehammer to the thing became reality. He didn’t even want hot chocolate that much, but the choice would’ve been nice.