I fail at reading calendars.

I've been telling everyone Reunions is out on Thursday 19th April, and it is out on the 19th of April, but that's...Wednesday.

In my defence, writing Hiding Behind The Couch does require rather creative use of calendars. To illustrate, here a screenshot of my timeline calendar, which I use to keep track of characters' birthdays, ages, anniversaries and so on: 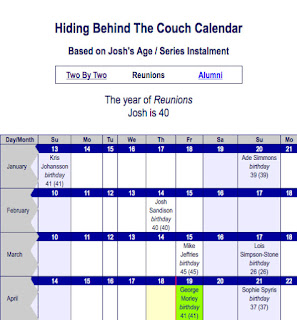 Yes, OK, I know April 19th isn't a Thursday there, either, but my brain frazzes on numbers if I consciously think about what I'm doing.

So, anyway, the long and short of it is this:


Reunions
- Season Seven of Hiding Behind The Couch -
is out tomorrow!

(Oh, and did you spot that little sneaky title up there, next to 'Reunions' in the screenshot? That's Season Eight...coming when it gets here. ;) )

FOR FUN...
A quick-fire interview with Sean Tierney (caught on the hop between jobs)

Place of birth: Derry, The North of Ireland

Parents: My lovely mum, Saorla; dad...let's not talk about him.

Ethnic Background: Roman Catholic (minority in the North of Ireland)

Favourite subject at school: I really loved religious studies, actually (don't tell Joshy). I was taught by nuns, and there was a fair bit of religion in our curriculum. I always found it (and them) fascinating. I even thought about entering the priesthood for a time. It's not for me, though. Apart from the cups of tea and chatting with people. I could do that all day, which is why I chose the career I did, obviously.

Married: No. I was. After the divorce, Sophie and I got together. That was five years ago, and we have a young son, so we're as good as married, I suppose.

Children: Just the one - Dylan Robert. He's a cracker.

Who do you most admire? Anyone who's happy with their lot, whatever that might be.

Overall outlook on life: I have my ups and downs like anyone, but I'm pretty cheerful most of the time.

Do you have a secret? Wouldn't that be telling?

What do you like best about Josh? His charming way with words.

What do you like least about Josh? He always sees me coming.

When greed, fear and obsession rule the senses, danger is never more than a heartbeat away.

A night of celebration affords the perfect opportunity for an unlikely band of criminals to make their move, but as details emerge, it soon becomes clear the crime is far more sophisticated than the police first thought.

And that's only the beginning.

Reunions is Season Seven in the Hiding Behind The Couch series.

This instalment follows chronologically from Two By Two (Season Six) and Those Jeffries Boys.

WARNING: this story touches on themes of suicide ideation, sudden infant death, cancer, dementia, drug dependency and dissociative PTSD. These are not graphically or gratuitously depicted, but may, nonetheless, cause distress to some readers.

The story also includes a few brief scenes of an intimate (non-explicit) nature.