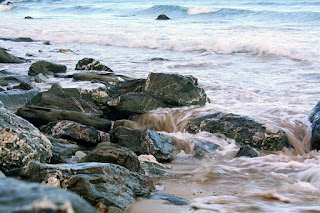 I'm going to start with the key points.
To elucidate:

I haven't had a holiday (or vacation, if you prefer) since...2000? I think that was when it was. Not what most people would call a holiday, at least, which would seem to consist of:

a) leaving home and all of the accompanying responsibilities for a set period of time;
b) not doing any work for the duration of that time.

What d'ya reckon? Does that sound about right?

Whatever, no doubt people will tell me I've been given opportunities for holidays since, but the thing is, deadlines don't wait, people don't wait, perfectionism doesn't wait. Perfectionism sucks (the life out of you).

This is how those holidays - had I seriously committed to them - would have gone down:

Sorry, students / university, I'm going on holiday. These assignment grades will be done when I get back.

Thus, whilst I've been away six times since 2000, three of those occasions were work related, two fell at the same time as a ton of deadlines, and the other, which could've been a holiday, wasn't, because Nige was having major trouble with his ears and hearing. I doubt anyone can know the frustration and isolation of losing the ability to communicate without going through it. I don't know how it feels, but I know the frustration and isolation of being married to someone who went through it. Suffice to say, it almost destroyed more than our holiday.

Back to the year 2000 - seventeen years ago - a long time, and it was an amazing holiday. I stayed on my mum's campsite, in a tent, read the newspaper, drank coffee, went to the beach... I was exhausted and needed to crash out, do nothing.

It's the last time I felt like that, because my brain has 'unlearned' how to rest. I'm only now relearning how to watch TV, or read a book, or just browse YouTube, and...OK, I know, my brain's still running through all of that. I don't know how to 'do nothing'. I'm not sure I ever did. I can shut down for sleep, and it's surprisingly easy, given what I've said. All I have to do is start plotting my current work in progress in my head, and in seconds, I'm out like a light. I hope it's not a testimony to my storytelling ability. Frightening thought! (Don't comment.) ;)

Seventeen years...during which my children have become adults, one of whom has children of her own.

Seventeen years during which my work took over my life.

2000 was the year I ceased being self-employed (running a home-care agency) to take up a part-time teaching post in a high school, thinking it would give me a little more leisure time, and it did. From being on call 24/7/365, there is only one direction, so I'd call that a win.

Except...teaching is NOT 13 weeks' annual holiday. It's working evenings and weekends and all through school breaks. Indeed, the only time I made sacred during those seventeen years was the week between Christmas and New Year, although that does not stop the requests for my guidance, assistance, advice. People are needy; I like to help. I thrive off helping others, but it so easily shifts from symbiotic to parasitic, and that's my fault as much as it is anyone else's.

The part-time teaching post - on top of my part-time lecturing post - became full-time, and I was soon working constantly again, which left no time for my family, and no time to write.

Later, my school post returned to part-time, which was more or less when I set up Beaten Track Publishing (2011), and at first, I made time to write (see my annual word counts below). But publishing quickly became a full-time occupation, and when I stopped working in the school (2014), publishing flooded in to fill the space.

I refused to cut back on my writing, although my annual word count has diminished by the equivalent of a novel a year. I know to some, those are impressive figures - I write fast first drafts. It's not the word counts that matter here, however. What I had in the past was the luxury of time to let my stories sit and rest, time to revise. Since 2014, I've lost that.

Now I'm claiming it back.

On 1st January, 2017, I set a New Year's resolution to keep weekends free of publishing work and - as far as is possible (given tutorials are on Saturdays) - university work.

On 1st September, 2017 (four days ago), I began a new regime of drastically reduced publishing-related work hours - down from an average of 16 a day to 5 a day.

Any requests that fall outside of those 5 hours, I log in my calendar and don't deal with them there and then, even though one of my 'strengths' as a lecturer, teacher, editor, publisher, people-helping perfectionist...is that I reply promptly to queries and get work done as quickly as I possibly can without cutting corners.

Needless to say, some are struggling with my hard line, but it's only day #2 (the weekend fell between, and no work was done on those days, hurrah). If I don't stick rigidly to this, if I say, 'Oh, I'll just do that now - it'll only take five minutes,' before I know it, I'll be right back where I started. People will learn...or go away. I hope they don't go away.

If you're someone I do work for/with and you're reading this and thinking...'Do I need to find someone else to do [whatever]?' No, not at all. Reducing my hours has increased my efficiency (see starting statement about pointlessly working one's ass off). I'll also tell you honestly when I can fit in whatever it is I do for you. We can agree mutually acceptable deadlines.

So, that's where I'm up to. It sounds positively leisurely, doesn't it? 25 hours a week. It is, compared to what I've been doing, even with the 16 hours of university work, plus 16 hours of study on top of that. And then there's writing...and then there's that family I mentioned. Plus sleep. I should probably do some of that.

And at some point, I might go on holiday.
deadlines holidays publishing work-life balance writing