Book Review: The Truth About Goodbye by Russell Ricard 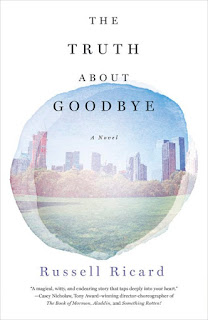 Blurb:
Sebastian Hart has dealt with a lifetime of goodbyes. And now, a year after his husband Frank’s death, the forty-year-old Broadway chorus boy still blames himself. After all, Sebastian started the argument that night over one of Frank’s former date-items, someone younger than Sebastian who still wanted Frank.

Challenged by his best friend Chloe, a quirky ex-Rockettes dancer, Sebastian struggles toward his dream of becoming a choreographer, and grapples with romantic feelings for Reid, a new student in his tap class.

Ultimately, Sebastian begins to wonder whether it’s his imagination, or not, that Frank’s ghost is here, warning him that he daren’t move on with another love. He questions the truth: Is death really the final goodbye?

The Truth About Goodbye is a coming-of-middle age story about love, loss, self-acceptance, and renewal.

Review:
I'll be honest; I thought twice about reading this novel. Three times, in fact. I read the preview and discovered it was written in third-person present tense, which - due to the wonders of popular fiction - is a rare form these days, and it jarred. However, I knew once I started reading, I'd settle into it.

The other reason I dithered was the subject matter. The blurb makes it quite clear this is a story about grief, and I read for escapism. If, as is the case here, the plot is well executed and the characters are fully realised, I strongly connect with the events and the characters' living through them, which means I'm pretty much going to spend the duration swept up in the character's grief.

That's precisely what happened. It took me around three chapters to stop noticing the narrative, and then I was submerged into Sebastian's world. He calls himself a 'forty-year-old chorus boy', and that's a powerful insight into his self-critical perspective. He's never good enough, original enough, young enough, handsome enough - Sebastian started out in a dark place, and his husband's death only drove him deeper.

Which, in part, is the truth about what it will take for Sebastian to say goodbye. His existence is driven by questions for which he's afraid to seek the answers. He's in a fantasy land, where life is just a Broadway musical (think second act of Into The Woods...) and every pivotal moment in which one of those answers might lurk is lost to Sebastian's penchant for being reminded of such-and-such-a-number from such-and-such-a-show. It's annoying and exhausting - for Sebastian and the immersed reader. Because, ultimately, we both of us know he needs to get real, escape from the fantasies he's concocted around every loss he's endured, every chance he has to move forward. He needs to say goodbye. And stop over-feeding Arthur, maybe fix up the place a little...

The secondary characters are strong and well-written if not a little clichéd, although no less real for that. I know musical theatre people, and I can spot the Chloes, Gregs and Mrs. Woos among them. It doesn't make Chloe any less like someone I want to shake. No doubt, her heart is mostly in the right place, but at times, she's a lesson in how not to be a best friend. Sadly, I know too many people in real life like that to cast her off as a fictional stereotype, and in a way, I wish the author had made her 'less real', not least because it would have been an easier read if I'd been confident Sebastian was in good hands.

Grief is a messy, seemingly impenetrable fog that distorts reality, and only the grieving can break themselves free of it. The Truth About Goodbye is Sebastian's spiralling journey through that fog, and while it doesn't necessarily have a happy ending in the fairy-tale sense, it certainly has a hopeful one, with a side order of romantic potential. This is a very strong debut novel - I look forward to reading more from Russell Ricard.