A Snowy Ball - When Skies Have Fallen 1.5 #LGBT #Christmas #NewRelease 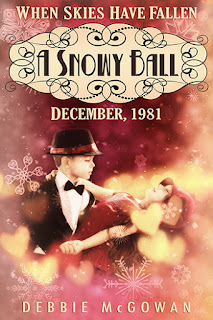 I should title this post ‘how not to release a story’…

Yesterday (yep), I released A Snowy Ball—a short Christmas story featuring Arty and Jim from When Skies Have Fallen.

I only decided to write it a couple of weeks ago, and given the date and everything, I decided to go ahead and get it out there.


Why did I write A Snowy Ball?
Quite a few readers have been kind enough to get in touch and tell me how much they loved When Skies Have Fallen—and made my day in the process :)—some of whom mentioned they would have liked to read more of Arty and Jim’s day-to-day life. I’d have loved to include more of that in the novel, but the deadline didn’t allow it, and I was quite pragmatic in my storytelling (first time for everything). So that’s the first and most important reason.

The second reason is that if I hadn’t written it, this year would have been the first since 2013 when I didn’t release a Christmas story, and I’m a fan of Christmas stories myself. 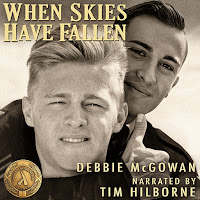 Lastly, I’ve been working with narrator Tim Hilborne on the audiobook of the novel for the past few months, so Arty, Jim and family and friends have been very much on my mind.

Thus, A Snowy Ball was born.

You can find the audiobook of When Skies Have Fallen on Audible and Amazon.


Blurb
London: December, 1981. A White Christmas is on the cards, but as the temperature drops, the pressure on Arty mounts. He's got far too much planned in the coming days to have it all buried under a mountain of snow.

Between his retirement surprise for Jim and the Christmas party at the dance school, Arty might need to curtail his daydreaming a little to ensure everything comes together. Still, if all else fails, at least he and Jim have each other to keep them warm through the impending blizzard.

Excerpts
At the sound of the front door opening, Arty abandoned both his daydreaming and darning and swiftly rose, switching off the TV on his way out of the room. He stopped in the doorway to watch Jim, bent double just inside the front door and fighting to get out of his boots. “Hello.”

Jim glanced up and offered Arty a weary smile. “Hey.”

“Yeah. We had to stop work. Too damn cold.” Jim straightened and began unbuttoning his coat, or tried. He was making very slow progress. “What’s the weatherman have to say?”

“More to come, I’m afraid. Here, let me.” Arty moved in and took over, hoping only he was conscious of his racing heart. The way Jim was watching him at close quarters, it was impossible to say, and Jim had asked more than once if there was something Arty wasn’t telling him. Thank goodness he only had to keep the secret for one more day. He’d never done well at hiding things from Jim. “No wonder you’re struggling. Your hands are freezing.”

“Care to warm ’em for me?” Grinning mischievously, Jim sneaked one hand under Arty’s pullover. Arty gasped in shock, instinctively trapping Jim’s hand with his elbow and keeping it there while he unfastened the rest of the buttons.

“There,” he said sternly, taking a step back and rubbing at the palm-sized cold spot Jim had left on his side. “Do you want to eat first or go for your bath?”

“Bath, I think. Warm up a little. Hey!” Jim called; Arty was already moving towards the bathroom. “I can deal with it myself. You go rest.”

Arty laughed. “That’s what I’ve been doing all day, love.” That wasn’t strictly true; he’d baked, prepared dinner, finished the ironing and most of the sewing, but it was all very sedentary and for no reason beyond those being the more pressing of the household tasks. In spite of Arty being registered disabled, of the two of them, he was in better physical shape, and it was telling on the eve of Jim’s retirement.

“Arty? Are you there?” Icy air blasted through the letterbox along with Jean’s call. Quite why she was shouting through it, Arty didn’t know; Jean and Charlie lived in the apartment upstairs.

“It’s open,” he said on his way down the hall. He turned the knob and pulled; the door didn’t budge.

“Apparently so.” Yet Jim had left for work barely half an hour before, and the door had opened no trouble at all. “Give it a push,” he instructed.

“I am!” It put up a fight, and when it finally gave, it sprang wide open, sending Arty staggering backwards. Jean stumbled sideways into the hall, bringing half a snowstorm with her.

“Don’t wait for an invite, Jean,” Arty joked. Jean’s eyebrows rose. “Where have you been this early in the day?”

“I stayed at Eddie’s. I didn’t much fancy driving home in the snow.”

“Come on through to the kitchen—the stove’s been on all night.” Too cold to wait, he dashed off before she’d removed her coat. He filled the kettle, calling back, “I wish we’d done the cash-and-carry trip on Monday, like we planned.” The weather had been brutal all week—rain, gale-force winds—and they’d put off the trip as long as they could, but tomorrow was their dance school’s Christmas party, and it would happen, snow or no snow.

Even though I have a couple more posts to put out before the end of the year, I’ll take this opportunity to wish you a very Merry Christmas and an amazing 2018.

Thanks for reading!
Deb x