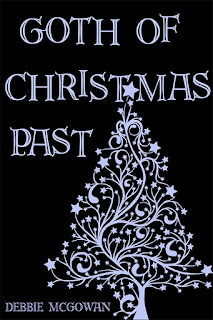 
WIPpet Context:
Over the weekend, I wrote a short story, which I’ll blog about separately once it’s ready for release, because it’s one of those quickies with no pre-release shenanigans.

For now, I’m still snipping Goth of Christmas Past. The pictured cover is NOT the cover, which is finished, but I’m keeping it to myself for now. :) It’s likely this novel won’t be out until next Christmas, because it’s nowhere near done and I’m looking forward to writing on it during my Christmas–New Year downtime.

This snippet coincides with a scene that happens in the first season of Hiding Behind The Couch (which you can download for free: http://hidingbehindthecouch.com/?n1=where_to_buy#free). This conversation happens away from the original focus of the scene but is overheard by another character. It’s a long snippet, but I didn’t want to leave it dangling.

“I was thinking…” Krissi flipped the battered ball of chicken with her fork and swished it back and forth through the sweet and sour sauce. Food that bright red really couldn’t be good for her. Around the table, people chatted away in their own little conversations, except Kris, to her right, waiting for her to elaborate, while she was waiting for her chest to stop vibrating with the hard, fast thump of her heart. She jabbed her fork into the chicken—“I might try to find out about my real dad”—and quickly crammed it into her mouth.

Well, not silence, because everyone else was still talking and eating, and the restaurant was busy. Waiters bustled; music played; the phone rang. But Kris was silent at her side. She couldn’t bring herself to look his way, could see, in her peripheral vision, his fork hovering above his plate. Shit, I said ‘real’. I didn’t mean to do that.

“Why?” he asked. His voice was quiet and steady. Flat, really.

“I…” What could she say? She hadn’t expected him to ask why, more ‘I’d rather you didn’t but if you must’. Maybe she should have. “I love you,” she said.

“No, I mean…I don’t want you to think it’s because you’re not…enough, and…” Shut up, you’re just making it worse. “Right, say he’s got, I dunno, diabetes or something that he might’ve passed on to me. It would be good to know, wouldn’t it? So I could change my diet and stuff.” Stop eating bright red food.

Krissi glanced at him and smiled but quickly averted her eyes again. Kris was an amazing actor. It was what he did for a job, so he had to be, but he could’ve put on an Oscar-winning performance—or whatever radio actors won—and she’d still have known he was upset. “You’re my dad,” she said. “When I said ‘real’, I didn’t mean it like you’re not, you know?” She put her fork down and fake-sobbed into her hand. “I’m so messing this up.”

“Forget I said anything, OK?”

Turning half towards him, she shut one eye and grimaced.

He sighed and shook his head, but he was smiling. “Real dad or not, I know you’re mine when you only open your mouth to change feet.”