My love-hate relationship with M/M Romance This probably isn't going to be the kind of post you're expecting, and, in fact, it has relatively little to do with M/M Romance per se. Had I reached a particular point in my writing life ten years earlier, this blog post may well have been titled 'My love-hate relationship with YA Fantasy'.

I can write in both genres incidentally, although perhaps not as well as other authors. I am (or I was) most comfortable writing contemporary realist fiction, so even when I'm attempting to write within other genres, the outcome is somewhat of a crossover.

Contemporary fiction is broad and not that descriptive as genre titles go. Indeed, it is not really a genre at all—it doesn't even have an entry in Wikipedia! :o It is, in effect, a catchall for any fictional story set in our time and space, and which doesn't fit neatly in any other genre.

Anyway, that's what I write. Wrote? I don't know. I'm still hopeful for a present participle...that's what I'm writing. Alas, I'm not really writing anything, hence my literary existential crisis, and I doubt it's uniquely mine. It's not writer's block—I know I could dump words onto the page, as I've been doing for much of the past four years. Sticking plasters.

Back in 2013, I began preliminary research for my PhD (which I've since set aside). Beaten Track had been up and running for two years, with the goal to publish diverse fiction—LGBTQ+ fiction for the most part. I was working with a couple of authors of gay literary fiction, both of whom include sufficient romantic elements in their work for it to be picked up by romance readers, specifically, M/M romance readers.

At that point, I knew nothing about the sub-genre, but I was intrigued by how it attracted so many female readers. I joined the Goodreads M/M Romance group and posted in the forum to ask if any of those readers would be willing to talk to me—initially just to answer the question 'Why do you read M/M Romance?' from which I put together the very basic first draft of my PhD proposal.

In 2014, I was still a member of the M/M Romance Group (I still am now), and saw the posts go up regarding the Don't Read in the Closet (DRitC) event whereby readers post story prompts and writers claim those prompts, from which they create a story that is then given away for free. And I figured...I write LGBTQ+ characters; I write stories with romantic elements; I could write an M/M Romance.

So I did. Two of them, to be precise (for that event—it was only the beginning). 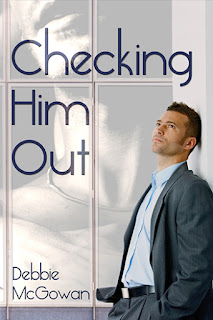 The first...well, it turned out to be a bit of a double-edged sword. It is far and away my most successful work (in terms of downloads/sales).

Lest I upset anyone who loves Checking Him Out...I love it too. I love the characters, and I love writing about their world. The story means so much more to me than its popularity (76,000 downloads/sales so far, not including those via the MM Romance Group website).

However, it is also THE story that changed the way I write, possibly forever.

Prior to Checking Him Out, I wrote quickly—most of my first drafts were completed for NaNoWriMo—but I spent a lot of time rewriting and editing, and only once had I published a book immediately after finishing it. I've since withdrawn it until such point as I can fix all the stuff that's wrong with it. :p

I also wrote Checking Him Out in first-person perspective, which I'd never done before. 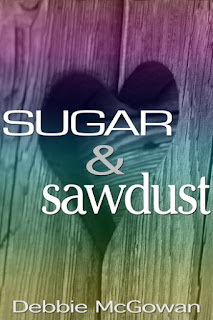 My second DRitC 2014 story was Sugar and Sawdust, which I picked up towards the end of the event, so it's much shorter, far less serious, far less polished—intentionally fun/funny (I hope).

Sugar and Sawdust didn't go down especially well with the M/M Romance readers on Goodreads, but I was a 'novice' in M/M, so I made plenty of rookie mistakes—in both stories. Admittedly some of those were intentional, but that's by the by.

Long story short (LOL), I wrote Sugar and Sawdust in two days, and it went straight to the editor, from there to the proofreaders and quality assurance readers, and then it was out in the world. No time for tweaking or refining or reconsidering the wisdom of some scenes. There again, I'm not convinced I'd have changed anything if I'd had the luxury of time to do so.

Notwithstanding some reviews that I found incredibly painful (live and learn), I loved being part of the event, and I made some amazing friends—people I'm still friends with now, many of whom I still get to 'work' with (this publishing malarkey rarely feels like work). 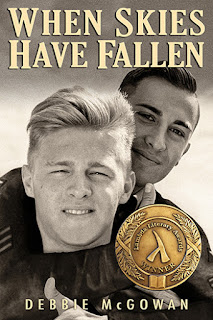 For those reasons, in 2015, I did it all over again, this time picking up a prompt that led to what may well be the greatest achievement of my writing career: winning a Lambda Literary Award.

I've said it every time someone's asked me in an interview—When Skies Have Fallen is the hardest story I've written to date, mainly because I kept it as true to life as I could, and tracking the history was traumatic. Re-enacting that history with my characters...it hurt. I cried. Never mind giving readers a happy ending, I needed it myself.

I'm still wowed by my Lammy, and I'm still proud of the novel, but this was the point where my change in approach began to impact on my writing process. I could no longer 'just get the words down' and tweak them later. I had to edit as I went along, which was why it took me seven years to finish my first novel, and also why I had found NaNoWriMo so liberating.

Throughout 2015, I was also co-writing the Seeds of Tyrone series with Raine O'Tierney, and again, these were M/M Romance novels, written and published very quickly by my pre-2014-DRitC standards.

Truthfully, the only way I got the words down was through collaborating. Raine wrote one chapter, I wrote the next, and we were always encouraging each other, giving feedback... Without it, I'd have reached my current point of struggle much sooner.

To complete the list, here are the rest of my M/M Romance titles:
Crying in the Rain
Checking Him Out For The Holidays
Taking Him On
Checking In
Cherry Pop Valentine
Class-A

And therein lies the other issue caused by my foray into M/M Romance. I used to write omniscient narration naturally. I didn't have to think about it, at all. Yet, as soon as I started writing in limited perspectives, my omniscient narration nosedived close to head-hopping, and even when it didn't, I was ultra-conscious of how readers would receive the story. Most modern fiction is first- or third-person and limited to the perspective of one or two characters. Most modern readers therefore find it a challenge to switch to omniscient or even multiple, clearly demarcated perspectives.

Ultimately, if I had never embarked on writing M/M Romance, I'd have missed out on having a long-term bestseller, which has led to me picking up readers for my other books too. And, of course, I'd never have won a Lammy or had the opportunity to write and work with some brilliant, talented authors.

If I could go back in time, I'm fairly confident I'd still write those stories (and maybe I'll write more in the future), but what I wouldn't do is succumb to the pressures of writing in a popular sub-genre—the urgency to get another book out there before readers forget who I am, and the need to create something that meets reader expectations yet is somehow, impossibly, unique.

Whether we write crime thrillers, romance, cosy mysteries, YA fantasy—whatever the genre—those traps are there, and while some authors make a lucrative living from churning out one novel after another in their chosen genre, this author is not a one-woman book factory. My singular goal right now is to get back to how I used to write—omniscient, fast process, slow publish—incorporating what I've learned from writing in a popular sub-genre.

But first, I need to re-establish contact with my oppo in the other dimension...